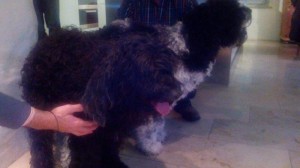 I was always hoping one of the girls born here would mate with Ulysse di Barbochos Reiau de Prouvenco after having him confirmed in France in my name to save him et al, but it didn’t happen which cast a doubt on his competences and we know how that goes round. After he mated with Manon Lescaut, hope came back and he proved himself with Abaya, again; which confirmed he was a “real” stud. He  had proved his worth also with Braise who has now a lovely line in Canada, that was  not without any hassels again given us by the same people in swissland breeding committee. His first mating which was brushed off by said swiss breeding committee was a severe blow to the old breed and yes, they did their best . It has taken years to bounce back, but bounce back we have with determination, conviction and support.

The 2  oldest studs left of the “old lines” are sort of making up for almost lost time!

Hard to believe that people working for the breed have left 3 pups males available from Ulysse and Ursus combined where it seems they should have been taken up in a flash, but, stranger things have happened.

These guys are getting up there in age, but at least now we can rest assured they will leave their pawprints on the breed and Georgy, who is probably looking at what’s going on ( good and bad) is probably smiling away…with all of our beloved dogs in heaven.