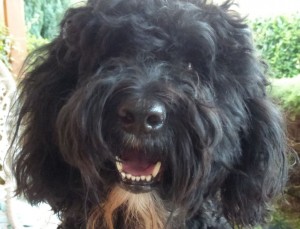 When you think you’ve seen it all, heard it all and that, in its home country (and some, elsewheres), the Barbet breed had it the bottom, thanks to lies, attacks, backstabbing and too much self promotion by our national sans-culotte’s advertising, well think again.
The Barbet is a working gundog, but when asked, not one soul can say who are these working dogs and how they work. Everyone knows what a Barbet looks like, but no one can say how.
Result of the operation…The Lagotto in France now looks like a Barbet, the Barbet looks like a Poodle and our governing authorities are now showing us that what we thought could not get worse, can. The history of the breed done from net sources which are only French is so totally wrong it is laughable, and absurd and as has been the case for 30+ years , and anyone who get in the way of what is going on…gets the hatchet.

France is not the place to breed Barbets anymore…sad but true.Buy a Labradoodle…you won’t get hasseled by useful idiots trying to convince you an oversized shave poodle type  stud is THE dog to use. Really makes me want to vomit. Only one Barbet? If that were true, I would have bought another miniature white Poodle.