Many years ago, there was a very famous commercial in the USA, “Is it live or is it Memorex?“. It became an expression for something a bit incredible. Here, we are also paying a tribute to Ella Fitzgerald who recently celebrated ( were she still a-live) her 100th birthday… 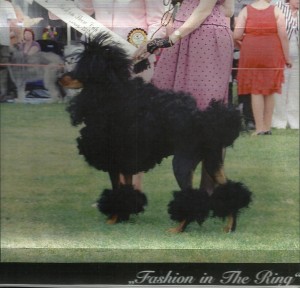 When I saw this photo, 2 thoughts jumped to my mind:

Is that a real dog and the polka dogs ( oops, dots) on the woman’s dress, hum…? It led me back to the connection: dogs + polka dots, and a comment  made by a person who seems to have fallen off the face of the earth after 20+ years of Barbetting  and how some interpret the standard who have no care for aesthetics, morphology or genetic diversity.She said it and I may still even have it in an email!

2nd point: the color…That is an “old” poodle color before they selected it out of the French standard. It’s just like the parti-Poodle and Portuguese Water Dog color- white and black banned also from French Poodle standard. These 2 colors exist all over the world and in France, the pups born “that” way are most probably culled to make sure they don’t reproduce. Culled means taking them to the vet, for that fatal shot OR throwing them against a wall to kill them as I have heard it being done by some breeder in France.

Conclusion: this is a real poodle, yes…and the colors we see in some Barbets is one of the colors that is supposedly on the list to be banned in the next standard modification that was going to be discussed last year at the symposium..it was of course more interesting to ask stupid questions from illiterates like : is the Barbet a Griffon? or how does a barbet become a champion!?

Are you following me? I am having a hard time myself following the logic of the Barbet being a rustic breed and not being selected for color( or size, for that matter) since it is such a fragile breed……

Wait for the day the club gets influenced as it has been recently, to include polka dots and wait to see how fast we have barbets with polka dots!