So……..you don’t start a sentence with a conclusion, but seeing that Poppenspaler’s Valencay and Vodka have just both gone to doggie-heaven and that you never know who could go next, I thought it was time to head south for lunch with my friends, Mrs Pêtre and her family and see Vincacao again.
Vincacao is the father of my Thelma,and also of lovely Ela Samba who lives in Switzerland and was just mated to a dog who has Vodka in his pedigree! Hopefully the Vodkas will come through:the boomerang effect!

Round trip in one day, since I have to leave some of mine at home…it has become a habit to go for lunch, chit chat and head home. 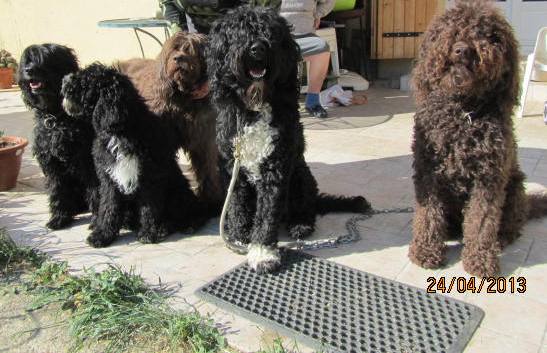 Soooooooooooooooooo, from left to right: Thelma, daughter of Vincacao, Vincacao, in front Vennie ( so Cacao is her great grandmother’s brother, so her great great uncle on one side and great great grandfather ot the other!)( correct me if I am wrong)
French, whom Mrs P said he was too tall at 59, but he looked real nice and of course Guyguy who looked like he felt: the odd dog out. Poor Guyguy, I did insist on the fact that when he was mated properly, he made some really nice Barbets.