A lot of time and energy, endurance against the avalanche of violent documented insults, threats, bullying to my person from a team led by an ukase  from belgium assisted by selected French, British, Luxembourg, Belgian and Swiss nationals in and out of Swissland (with the repurcussions extending far north to scandinavian countries)…since the symposium they did their best to make a flop of. We all know who they are and even recently, vérité burbet was transformed into “ghislain” to make another attempt at going for the throat, my throat on a social network…however this time…it did not go his way.

Not that “the coast is clear” feeling  has set in since a dragon as we all know has several heads, but it is high time the breed be run by the French club and not all those who refuse any truth or any documented facts about our poor French Griffon de chasse.

I almost feel that now I can start posting sources, book names, and real references I was not able to do until now, and of course continue the path back to the real breed and not the Barboodle, so many promote. The photo below, posted on a social network as a waterdog “type” shown with a nicely dressed family is taken out of context to show us without any proof that it is a whereas any one who has done real research would agree that it could not be or prove it!. The Griffon Barbet…d’arrêt was an all around farm dog/hunter/retriever/gun dog/ herding dog when necessary..and guard dog on farms not on a couch in a sitting room. They still exist near the Somme and no, they are not registred LOF dogs…but they are certainly the pure natural breed that was the Barbet. 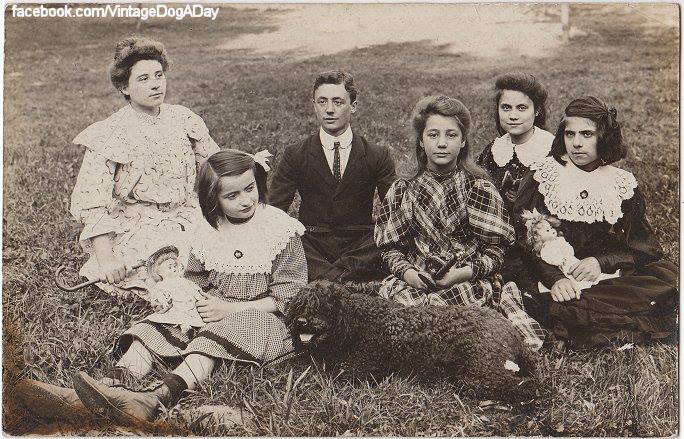 Thank you JC, at Dog Genetics UK for sharing the photo. This may have been THE one that finally broke the camel’s back!