Very  nice to be able to see them. I hear they will be also posting the appreciations where the sizes are. Transparency would certainly put an end to dishonesty, however when you’re chumchum with the judge as we have seen in the past…and on FB, then what? 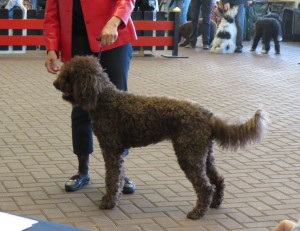 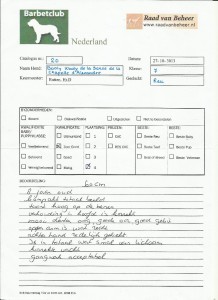 This is GuyGuy’s appreciation. He got a very good (Champion class) which I was not expecting more. He does not know it and I don’t care, so he was happy to play in the ring.

I do not have kennel blindness and he is not my favorite type but he has made wonderful pups, when used properly ( ex: never with a Poodle type or we would have a litter of full blooded poodles, as with the guide dogs in Paris, argh!they were awful BUT very nice dogs…). He has had 2 litters with Coccolina and many of the pups are very nice looking…as we all know, some are champions! They all have excellent character. I am told that regularly.

The point I was wanting to make was that the short coated poodley type that made champions several years ago is now a thing of the past ( hopefully).GuyGuy’s coat will grow and I will let it, of course. From one extreme to the other with all the poofed out types  to win shows but also hide defects, we’re facing another problem. There were a certain number of extreme poodle types with long legs small heads bad tails short square bodies and shaved down to show defects better. They come also from a long line of poodles for which we have photos, when we can steal one or 2 over the years “JUST TO COMPARE TYPES”….and the comparison is rather easy. Carbon copies.( we rarely see whole litters as adults!)

There were some real barkers and the Barbet is NOT a barker.

The happy medium being: 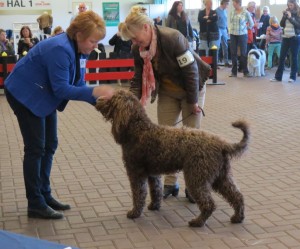 3/4 Barbet+ 1/4 Poodley makes for a stronger, rustic, shorter legged, nice angulations, good coated dog.Nice big head, nice ears( short poodle tail), excellent character and  overall my first choice for the males there!Now, IF the appreciations were to be shown as I hear they will I would love to see what was said about this male.

When it was said, so “off the cuffeddy” at the 2012 symposium ( for which we are still waiting for the report…) to mix everything…perhaps that ought to have been done 30 years ago when our dear barbet reincarnator friend and great breeder decided to eliminate any Barbet ( read: “Griffon-Barbet”) blood existing. This is in the book: 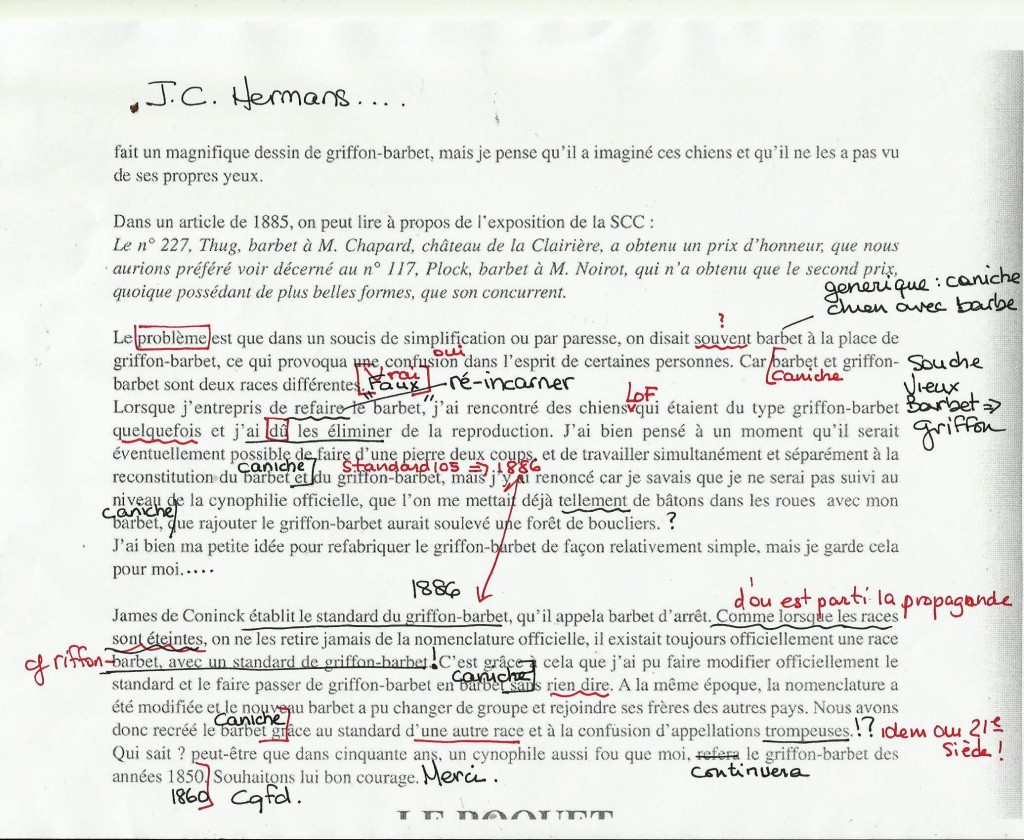 The problem being with the will to simplify things or by laziness, people often sais barbet i/o Griffon-Barbet, and that was confusing in the mind of some people. Because Barbet and Griffon Barbet are 2 different breeds.

When I decide to remake the barbet, I sometimes saw some dogs who were typed Griffon-Barbet and I had to eliminate them from reproduction. At some point I thought it might have been interesting to kill 2 birds with one stone, and to work simultaneously and separately in reconstituting the barbet and the Griffon-Barbet, but I gave up because I knew I would get no support from officialdog instances or kennel clubs, and that people were already so much trying to create problems for me with my barbet, that adding the Griffon-Barbet would have raised hackles.

I do have an idea to remake the Griffon-Barbet in a simple way, but I’m keeping it to myself.

Who knows? Perhaps in 50 years, a fellow dog lover as crazy as I was will reincarnate the Griffon-Barbet of the 1850’s….let’s wish him GOOD LUCK.

He said it himself..’Twas not I. When people can grasp that simple concept, perhaps things ought to click in some heads and we wouldn’t be getting the “…and the others? r” remarks...we ARE the others, fighting for the survival of the OLD BREED and not supporting any mixing poodles into the Barbet any longer.

The Modern Barbet comes from the mixing of 2 mutts in the 80’s and adding a long line of Poodles( as listed in pedigrees)…IF you want to make more of them, no one is stopping anyone from doing it.

The VIEUX BARBET is a breed fighting for survival. As JCH said so lightly, being eliminated from reproduction and that is being perpetrated by many breeders who know nothing about breeding and should do some elementary research rather than listen to heresay of fivestar socalled breeders. the Barbet would be better off than it is now.

I really enjoyed the show, the people and seeing all those dogs. Last but not least:

Anyone who says they are the same breed is talking through you-know-where and showing ignorance in the breed and its standard……and history.