Rumour has it that Mrs Françoise Loiseau has passed on. She represented the Barbet for several years at the club and was a close friend of Mrs R Rault who protected her* . I will certainly be one of the first to thank her for being the first to talk about “home-made pedigrees” and reveal quite a bit of information about the pre- 2000 period of the club…she knew a lot about what went on….and I heard more than I can ever have imagined.She was my inspiration to investigate the breed and its history.
She gave me my lovely Thelma Lou against a case of wine and was never into making money on the breed.That was never her objective.
When I used to visit her while her companion Alain, was alive, we had a great time together and she told me a lot about the breed, the people and who was who.I learned a lot from her, until she turned on me for very personal reasons. I did visit her 2 years ago, and I was happy to see her. I think she was also pleased I stopped by. 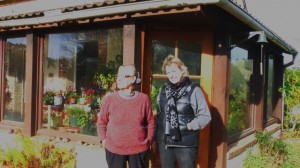 The picture below is from 2002 and my Thelma Lou is one of those pups. 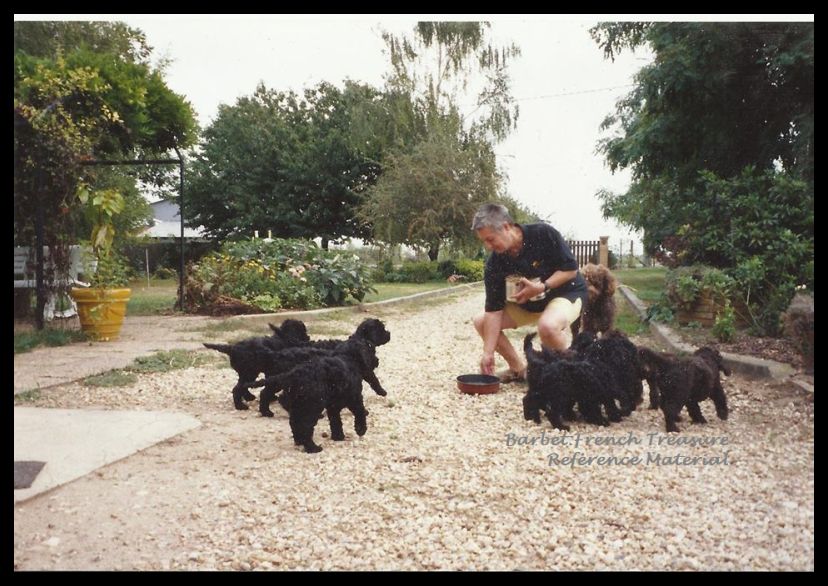 I hope she has a better life where she is now, because she did not have the happiest life here on earth.
When she was finally allowed to resign, ( she was not allowed to for political reasons*) she basically became a recluse and never wanted to hear about the breed again. That happens to many who have suffered through a particular regime.

The  French breed club, as a tribute to her, did not wait long to show (medical homemade) “proof” about how the CNRS AND Finland do not know their job when one person alone resolved the issue of epi in the breed Barbet  sitting in her kitchen in 2009 with a lengthy report published early 2010…the objective at the time, because I was there and still am, was to bring down dogs and breeders…and then the rumours started, by several sitting around that table in 2009…about how you should not touch this or this dog, and stay away from this or this breeder, from the mouth of our great showdog winner.. because he or she was sick ( dog and owner, of course) et blablabla, which still goes on to this date because perpetrated by several who attended the 2009 “meeting”( link below) ..well it’s interesting so many years later to wonder…

I had asked Mr Hermans about the health of “his” line and he said there were NO HEALTH PROBLEMS anywhere, and I bet he would say it today…and then, he proceeded to accuse Mrs Loiseau of having nothing BUT sick dogs…but then…they have the same ancestors as all the others…?!Don’t they? And if you look at the names of the countries where the litters were born, there’s obviously one country, a hop skip and a jump away from me, where there is NO epilepsy..humhum and the main breeder is even thanking Mrs Loiseau for what she did..then why go to Bern, then?
Another slice of history is unveiled, since the very competent breed club now requires anti epi certificates for ALL dogs that reproduce here in France…and ceci explique cela…Well I have them for my dogs…and Bijou and Booly Wooly..tada.Now, if you look at some pedigrees of dogs that have never reproduced a hop skip and a jump away…which I did wonder a few weeks ago when looking at Ungaro progeny…humhum.

Another bit of Barbet history with another stone laid to rest.We all know yhat history started with the Canailles de Verbaux and many of us have done our best to stay away from them…so rumours or proof? Decide for yourself.

I think showing pedigrees as a tribute to what she contributed to the breed is a pretty interesting tribute…as Mrs Loiseau did work against the club for many years until they got her back in on the committee so they could control her…sounds familiar and that is why I thought to myself..never in a million years will I ever touch that deal, not even with a 10-foot pole.

Thank you Philippe Seguela for writing in a letter that the club WAS offering me a seat on the committee..

Françoise did not always have a nice life. I am sure of that. Now, she is happy where she is.
Bless you Françoise…

Your legacy will live on!

*not the topic of this day, but it will all fall into place as to why she was not allowed to resign…