Funny how things happen to fall right into your lap. I was trimming ( overhauling) my hedge today wondering what I should post first on this page, since I had not had time ( for diverse reasons) in the recent weeks. There’s always something Barbet going on, one way or the other when you have been in the center of things for many years. This is Iabada at 5 months…she is the daughter of Babaloo von der Leibrücke and Ulysse di Barbochos Reiau de Prouvenco, as you all know, banned from breeding in a certain country I shall not mention since we know it. 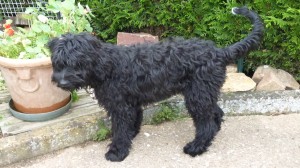 This is Coccolina, his great-grandmother below at 6 months. Notice the ressemblance? 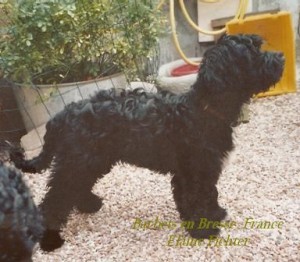 I am particularly proud of these 2 photos since Coccolina’s ( through Verveine) line is one of the most used in the Barbet world for it’s type very different from the Poodle we have a lot of.

The most fun ( haha) detail is of course, Iabada’s father having been forbidden to reproduce for he had not a Poodle background, by forbidding him to reproduce…and it shows here on the back of his pedigree below he had to leave his country. It appears things must be done hush hush( as usual) and no names should ever appear for anyone taking the responsability of the decison to transform an breed into poodles which exist already. So, we managed to get him back into France and he has a French pedigree and has 40+ progeny..

I only regret not having him in MY line earlier when a mating failed and he was probably accused of it. Sad, but those things happen and we don’t always comprehend how people who are supposed to be “real” breeders can’t manage such simple things.