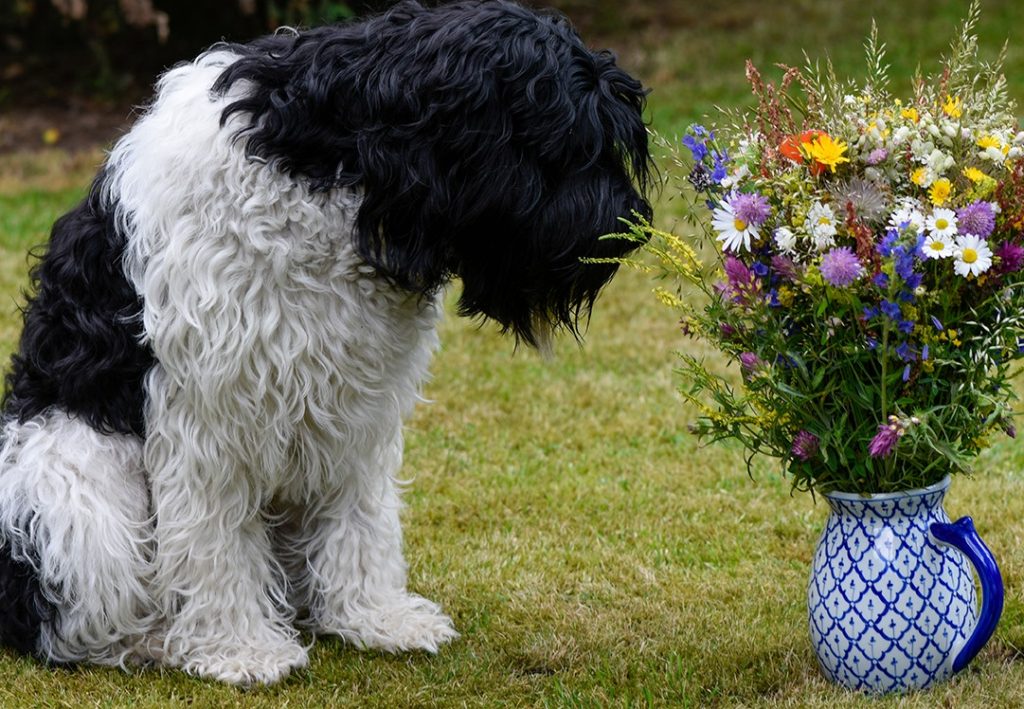 Life in the Barbet world, is not a lot of fun. Never has been..In fact it’s all about who badmouths who and when. It’s not at all, nor has it ever been about dogs. Scrtach the surface and you quickly get to the smelly part.Promotion of their own breed and that one has nothing to do with history!

There is an added dimension..and that being many breeders are running out of “new” blood and scraping the bottom of their drawers…using studs who are younger and younger and over and over..and the habitual breeding for color.

Recently, and probably because of the publication of the easy to understand factual history of the breed, Barbet Moderne breeders felt the necessity to launch an attack led by Pontius Pilate,  whose job is to thrash people for money..but never deal with the breed ..mandated by our old totalitarian breeders whose income depends on their sales of a myth, created in 1990 and “threatened with extinction”!

My head always sticking out for facts and truth, was of course the aim of the skud, with a  mission : kindness.. nothing again to do with the dogs..

Sadly, jealousy and envy are doing their best for the breed and time is ticking.

I am a purist, I got to 5 generations of healthy dogs..with the perfect historical type I wanted. http://barbet-frenchwaterdog.com/water-dogs/griffons-and-the-likes/vieux-barbet-or-griffon-barbet/

I was asked many times if I was a breeder. Well, it’s like being bi-cultural. Which do you feel more? Well, it all clicked in my mind and no I am not a breeder. I just want to prove that breeding to obtain proper results as far as type/morphology and temperament, IS do-able when you take the time to evaluate the results, not to compete for sales and to sit back and smell the roses. Now, I am smelling my roses and enjoying them…. 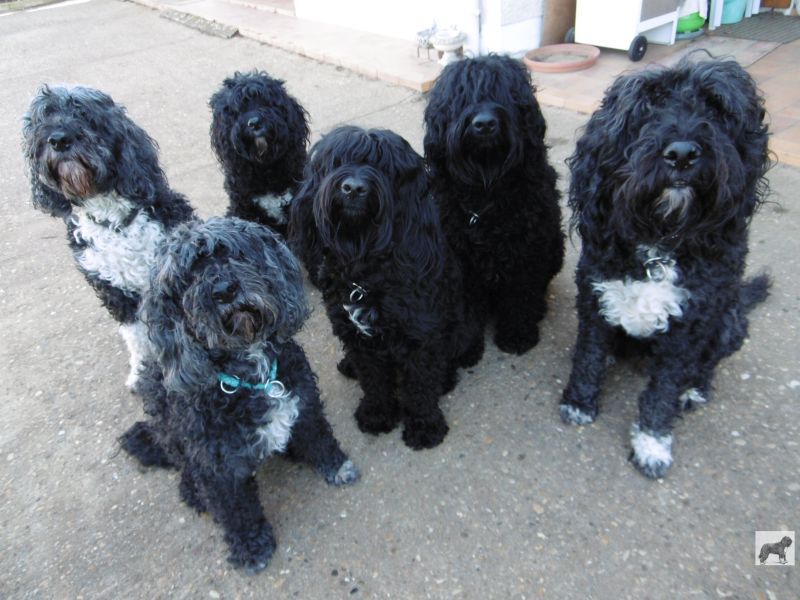 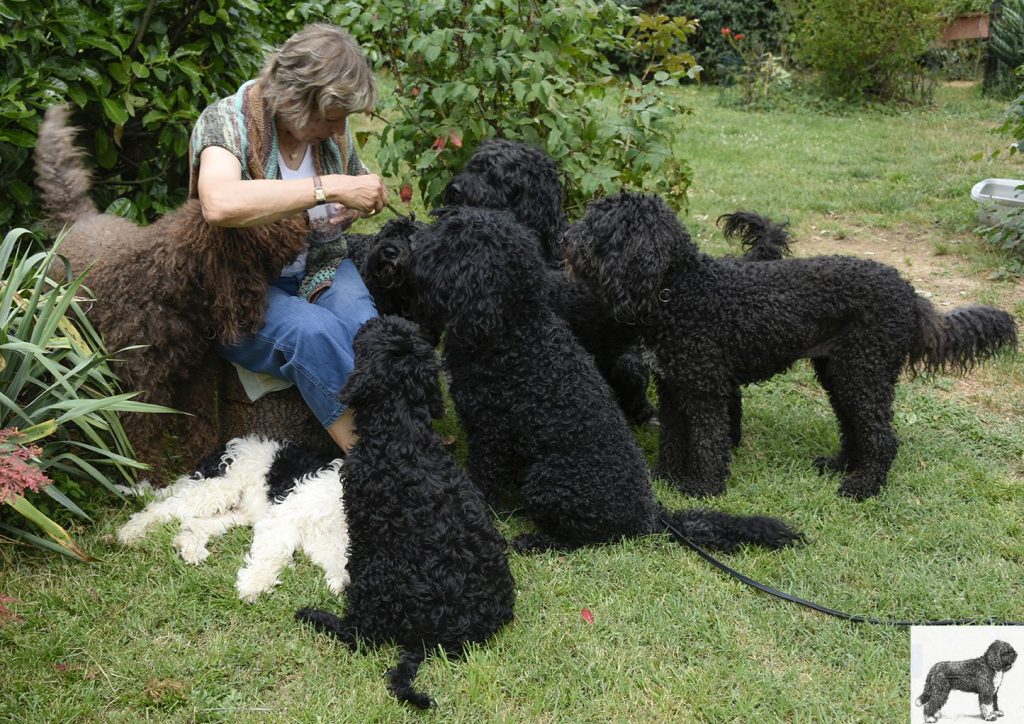 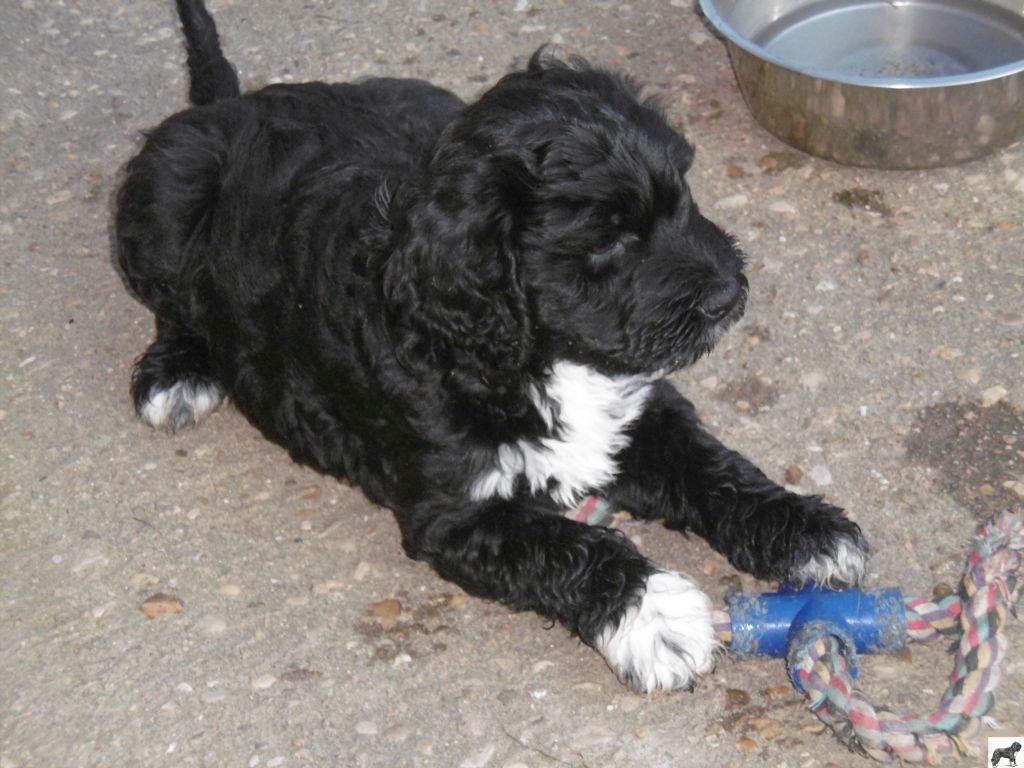 ..it happens once a year ( but not always), and it is generally planned out..the rest of the time is spent taking care of the dogs, making sure they are happy, doing research and answering the numerous questions people ask me about the breed and its history. That is not a very difficult part since I usually have the answers or the question leads me to doing some more checking to be sure of my information, since I hate misleading people. AND I enjoy helping.

Of course, my blood curdles when I see misleading, idiotic and deceitful comments about the Barbet..and there being only one…That is a permanent issue that is not helping either breed variety! It is very confusing to many/most people. However there are 2.

The “poof” Barbet Moderne re-incarnated/created in the 1980’s that they are trying to save from extinction? OR the Vieux Barbet that they say was extinct between 1940 and 1970..There is NO rhyme or reason to what is going on ..let’s face it?!

Facts versus fallacies or fake truths! How long will it last?!

My Barbets have the highest quotation on the SCC/FCI selection grid of any breeder
in France. Facts are facts and accomplishments are what they are. 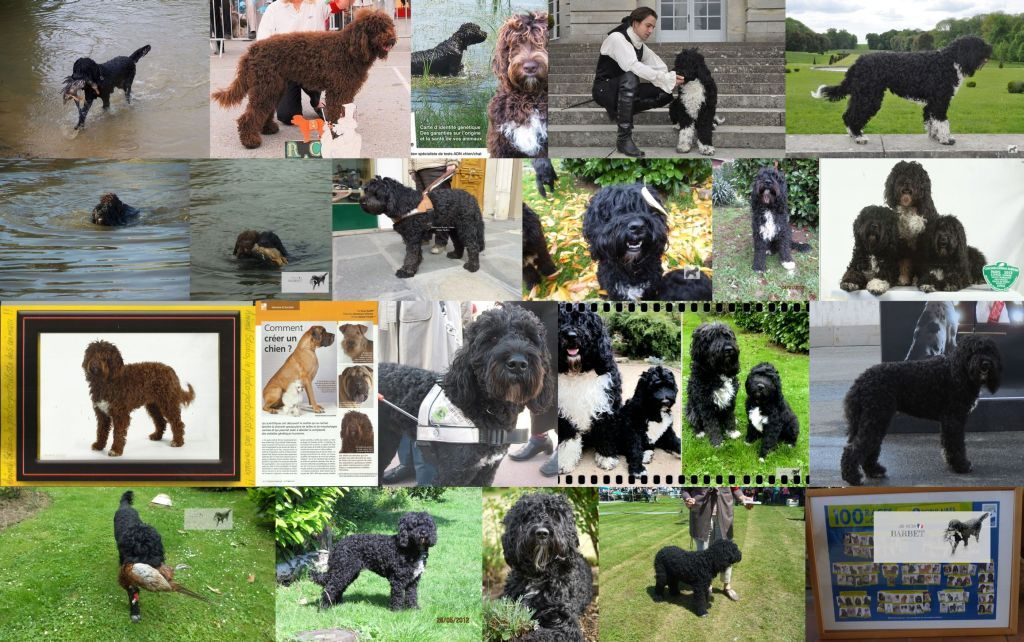 I am not talking about shows because “shows” as we all know are not always the best references in a breed. I have done my share of shows for 15 years. Not what I enjoy the most.

Suffice to look at the facts. Fiction is what goes on in the background. When I have a litter, my pups are reserved well before my litter is born. I speak the truth about the breed and my work. It’s very simple. I followed my track…and have done my best. I do not have to advertise.

Below, is how it all happens  here in France when you have an SCC LOF registered dog. This is factual and it has nothing to do with what the breed club does, or does not:

scroll down and you will see the stars acquired by the different dogs.

the cotation ( selection grid) is only in France. It as you imagine gives the “worth” of a dig vis-à-vis

the dog world and reproduction.

It can change , and it has recently changed ( retroactive to January 1, 2016), no notice was given. It was and is immediately applicable.( as have been standard changes)

What has been added gets more and more difficult to achieve. Coccolina ( Ermengarda) being the highest ever on it for the Barbet. ELITE B

It has nothing to do with being a member of the club or not. And if you look around you will see there is a list of breeders who are club members ( which I have not been for 4 years, because they have worked on people more than helping dogs). (path to get there is below)

So, at this point, with the new rules, to be ELITE B =5/6 selection grid, I would have to find ALL of Coccolina’s descendants and ask them for a veterinary certificate saying the dog is not taking any kind of medication for epilepsy.( along with DNA; Test s for coat texture/color). Coccolina being the only one who reproduced out of her litter…I would have to have well over 1000 letters from her descendants owners  before she ever could get the 5/6 cotation. I, coincidentally, have been trying to find her sisters..and get news…imagine.That is not an easy task!

I, of course  have got all the health certificates,  …It’s always nice to have along with all the real information about the dogs.( you will see an example below, along with the “cotation” document).

I had already decided one + year ago to stop any shows and to never ever go past  cotation 1/6 IF I even continue breeding since life for the breed is very difficult,and I have accomplished what I wanted to, and I have proved my point, against all odds. I now go on vacation..because I can afford to!

I have ALWAYS contributed to scientific research ( since 2007 when it started), done DNA for parentage ( I have several generations back to Poppenspaler’s SANGRIA). Hips, Eyes all contribute..to a healthy line, to standard. 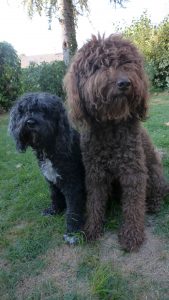 You get there by scrolling down on the list of “PRODUCTEURS” and then click on the number.

Follow the same paths and you will see  SCC confirmed dogs who belong to breeders. It, of course, has really nothing to do with the price of a dog, even if it is genetically worth more or less!)

Next: click on this and you will see what their version of the history of the Barbet is…( and they have refused any dialogue to update it, since it is very wrong and misleading, ). It is not the ancestor to the poodle.. I have never been commissiond to do any historical research for the breed club. This has been done privately, out of interest for the truth, and a passion for truth….passion, since 2003…

From there, click on CLUB DE RACE, and SITE INTERNET DU CLUB, then ELEVEURS across the top in the green line. You will see the breeders, who are members of the club. You only have an SCC webpage IF you have produced Barbets.

I had not planned on spending any time doing this, since I am no longer in the context. The positive side is you will understand how a few things work in France.In English.

Last item, you do not become a Champion, from “just” attending ” shows and getting points. It’s much more difficult to become FRENCH CHAMPION, than it is in other countries. That not being the subject of the day…nor is the politics of breed clubs who forget their prime mission is to support/encourage/protect our poor breed, threatened with extinction in its home country.

Have a good one.

On the left,  Thelma ( BCE 2nd cat.) and GuyGuy ( BCE 1st cat), on her back.  On the right, mom and son again, side by side.I suspect this is also where some can say they have a “hunting line”.It probably takes a bit more than that to say so, but I’ll take it as a compliment since our dear Hercule di Barbochos Reiau de Prouvenco is in the line, too: a founding father of the Barbet de chasse! Then Vincacao, Armagnac..that all together makes it a hunting line? 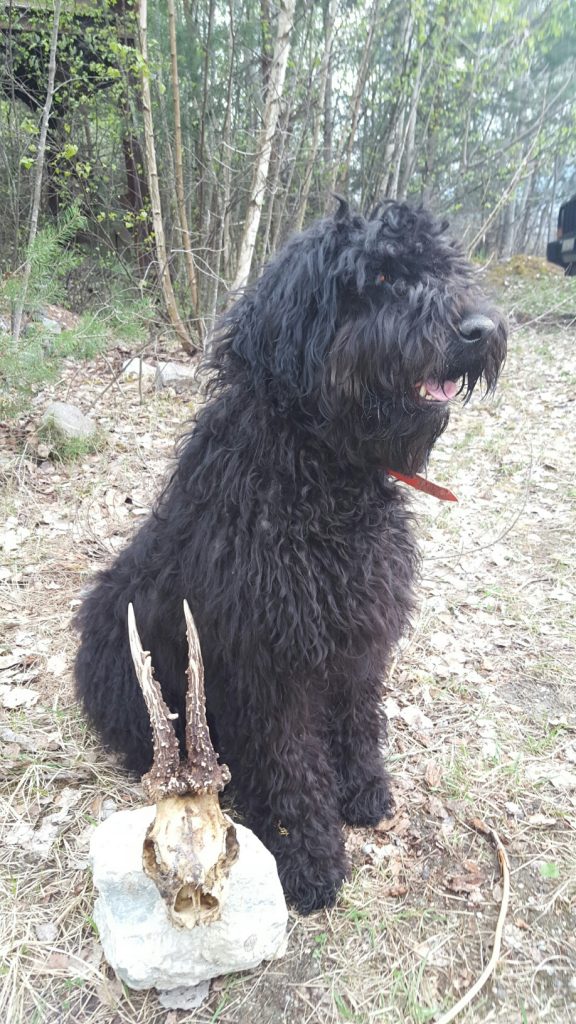 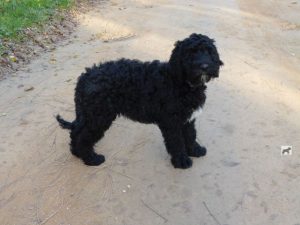 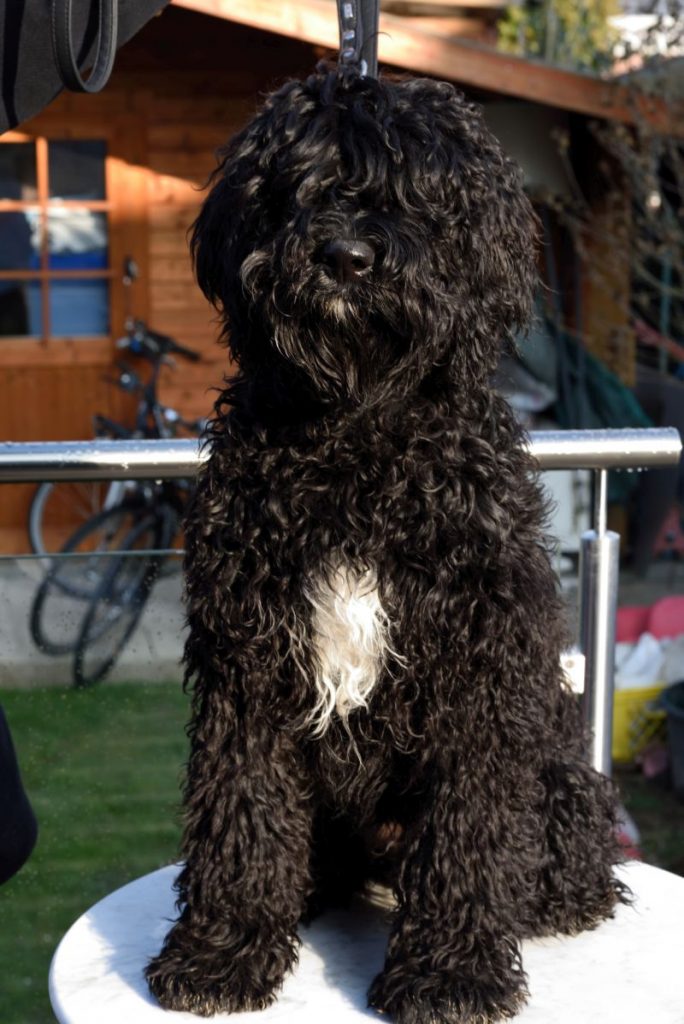 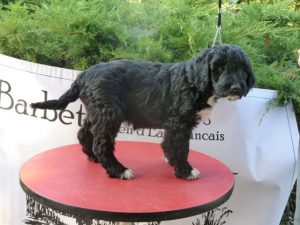 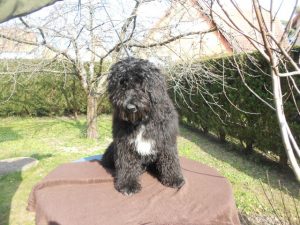 Liriope ( Liri) (above and below) 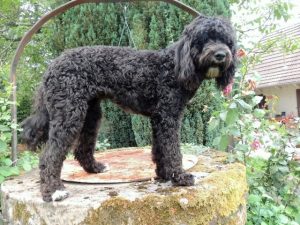