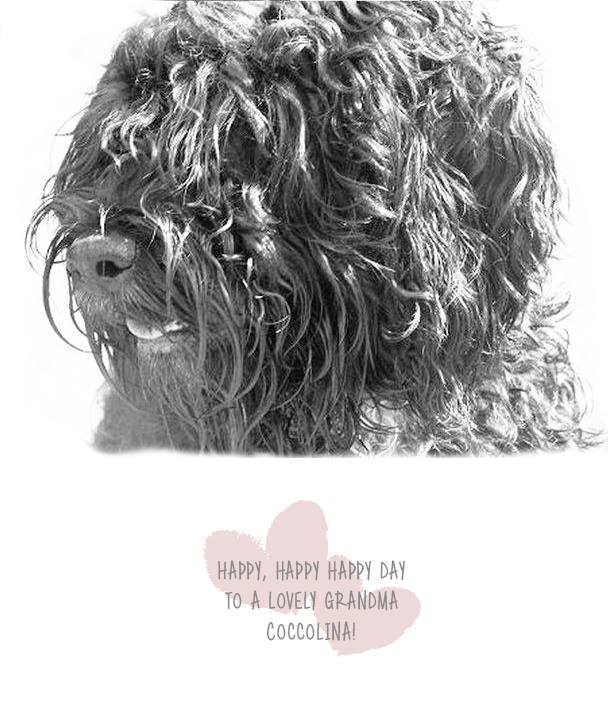 Yesterday, for birthday girl Coccolina, at the top of a line of nearly or (more?) than 700 Barbets, it was a normal day…with many extra hugs and kisses sent from all over the world.

Thank you for your kind wishes.We have so many people of good will who care for our breed, sometimes it’s overwhelming when you think of what goes on.

….and turning the page.

Club bulletin: December 2002 n°73. Basically what it says, “Shame there was not a show organized for the dirtiest dog and the most neglected because competition would have been rude.There are still people who have not understood that a show dog must be presented clean. If one does not want to take the time to brush their dogs, then get a short coated breed, there are many….”

After, the show results of Orleans are not in the bulletin, when others are. I suspect that JCH is referring to Mr Georgii’s dogs.I have seen that written yet before, in another bulletin before 2001. What I would like to add is that I never saw him brushing any of his dogs since he had a groomer always do it..Mrs Fischer groomed her IWS herself, no one else was allowed to. It gets crustier on the next page, but not the point here. Voilà, voilà.

I am quite used to ( also) being attacked by the socutesonice French breed club. Nothing new and it’s been 15 years. The only president who did not attack me giving credit where credit is due, is J Goubie. I didn’t always agree with him and what he did        ( who does?), but he did try hard and was shot down. Another one to bite the dust. He tried to set up some things and no one cooperated with him. So, voilà, voilà. What I have always asked for? That they talk about the dogs and what they can do for them and not “just” the breeders and who said what where and when. That the F breed club focus on what they can do for the Barbet………..How difficult is that?

That they be transparent about what they do……..and say and not be the first to propagate rumours about for example, the latest…which came back to me from different sources. Grooming…on my rear I was with Ethel Mertz facing me to make sure I understood French properly..

Coats coats coats coats the eternal source of conflict. Based on yet to be shown scientific proof, it was said that a Barbet coat should be with a layer of matting to protect the skin. So, we interpret it as best we can in our petites têtes..

In this era of visuals, we get words…and more words but fais comme image? but quelle  image??? that is the question….

So, at Game fair again, I was standing trial “Mme Ficter this Mme Ficter that”, and I happened to look over yonder at club photographer photographing our little group from about 20 meters and hesitated for a second to go ask him what he was doing, now …because he probably has hundreds of photos of what happened in detail that lovely day that will go down in history, again. So, I am sure he has phtos of Guyguy being overviewed…

To my left was, GuyGuy/ Booly Wooly, with secretary’s hands going through his coat like a monkey looking for fleas in its progeny. Got the visual? That’s it. Guyguy’s coat was brushed out, so a bit poofed.Here you see more ringlets since he had been in water and air dried.So, no matts…and since his top coat and undercoat are the same and clean, hard to tell a difference in the size of the follicles…. 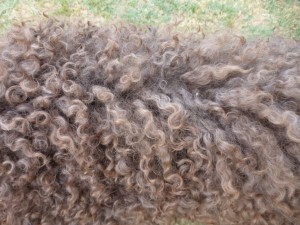 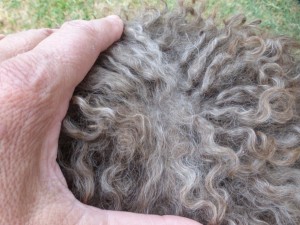 I wanted to ask what she was doing but couldn’t really since I was supposed to be listening to lecture, like at school. Soooooo, when I got home, I sent lady an email which to my great surprise, she answered saying she was not giving opinions as to why she was doing it, because judges are the ones who are supposed to do it.

BUT…thinking to myself? Who tells judges??? breeders?? and if so since when?

A  breed club with at the head only Lagotto breeders, which I have never said anything negative about even if I did wonder how they were going to handle la différence, whilst not have any of that documented scientif proof we’ve been waiting to hear about…like what is a Barbet? and prove what you are saying?!

Would it be a breeder bending their ear? Impossiblo. A layer of matted hair to protect the dog when it goes into water? 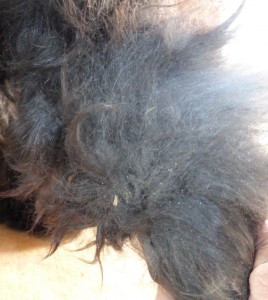 So, that’s what they call it now! Make(s) hair become gray, flecked, smelly, dry and dead.And here it is what I thought used to be called suin, an oily substance that they (dogs) had on their skin to protect them in water.We’re all spending hours brushing dogs, for what? Nothing! Let them grow that layer to “protect” them…Make sure you can’t ever see the skin under and voilà. Here I had always been told by Mrs Loiseau, “le peigne doit passer partout” no longer is valid. The famous peigne must only brush above the matt. Fini, pulling the dog’s hair out and ours out of frustration….tell people your dog is protected when it goes in water. Only problem now, is “does it go into water?”…Gag me. 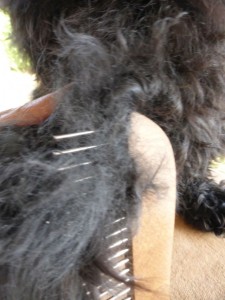 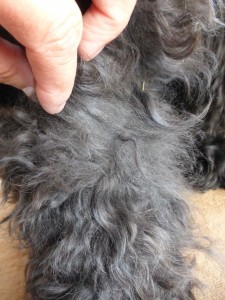 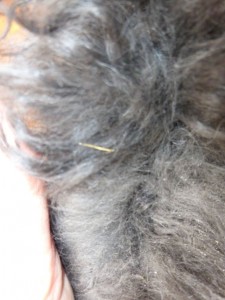 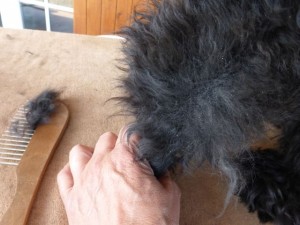 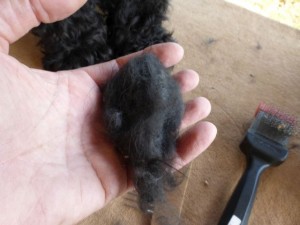 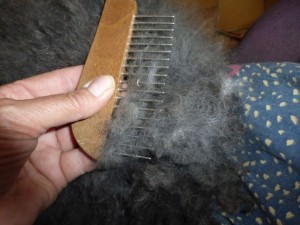 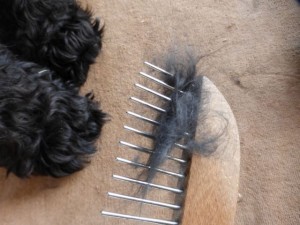 Rant over, til they aggress/harrass me again.

And so it goes…a dog grows and grows, eternally!That is the latest news from the land of Cosette;

If you are here, you obviously know that many of us trying to get the poodle out the breed Barbet, do our best to bring down the size of the dog, hoping that at some point the standard will be dealt with properly  to lower the official sizes, now that it is happening in real life.

What is counter-productive now is that some are claiming their dogs to be bigger, which is a bit strange as their size is incresing to please a Raspoutine of sorts.

Here if I wanted to… I could let Guyguy’s coat grow and grow and let it get thick, be super friendly to a judge who would automatically add 2+ cms to his size and make him just standard for breeding purposes…eh oui, ma brave dame.

In his case, he would go from 59.5 to 61 or even 62 with a nice thick matted coat*…Arrrrrgh! He is tall enough and therefore it is easy not to want to be photographed with him, eh? 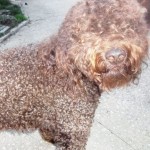 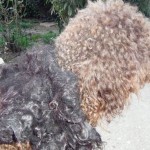 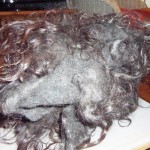 Now of course, you can add centimeters by adding a thick layer of an ungroomed matted coat and the the sky is the limit. Some judges working to please and disregarding the standard are collusive to the act…that being nothing new. They will write just about anything to keep judging at shows and please.

In passing, please do not blame any of the overgroomed matted dogs on RT Georgii as he was a teacher and not a professional groomer during his working life and he well paid his groomer to deal and overdeal with his dogs.

* remember, I save coats and hair, you never know when it can come in handy!

2 years already. Time flies…It is now their turn to reproduce with Georgia on my mind going for gold, hopefully having a litter this summer ( father is Borée di Barbochos Reiau de Prouvenco).

Gandar aka Nero, lives near Annecy with his family. He does have a lovely coat with big loopy curls. he has the typical look of the Barbets of Coccolina’s line.

On the left: Millie B in Canada and on the right Tufi over yonder the Alps! Both daughters of Coccolina.

French’s coat was cut quite a while ago and it doesn’t seem to be growing, which I do think it is. It’s so easy to care for. I love it.He definitely looks like a Griffon here! 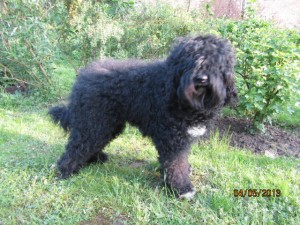 From being completely matted, it took me 2 hours to brush her all out into this poofball.It is a bit oily and the comb had no problem.
Tomorrow, we plan on hitting the water, which would not have been possible with her coat in the state it was in until today.I look forward to seeing how it turns out dry.

This is the new look for winning in the showring. The advantage is that it hides all flaws a dog could have!…Don’t particularly care for it as it is not representative of what the breed should look like.Interesting to try, though.

It sort of loses in the translation and over the centuries, wars have been started when people don’t understand each other. You need not examples, just look around you! FB communication is another…with translations that mean nothing.

So….why this? It’s all about habitual transparence, and how people flaunt what they have not achieved, which led to… 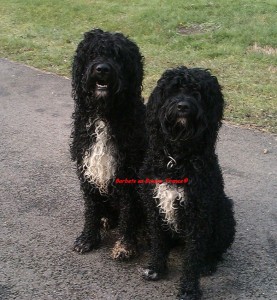 … a very humorous exchange between several of us this weekend…It’s a bit difficult to explain the expression “donner du poil à gratter à quelqu’un”, meaning keep them busy enough trying to find a solution to a situation (so they will shut up for a while)!

I will use the typical expression used in our Barbet world by yours ever so truly, meaning not me…”People who need to know, know”.End of conversation.

I love to play with words in both languages, as you know, but I am not sure many will understand other than the “useful idiots”* involved in this particular affair.

So let’s play with rosa canina soap…do you think it’s useful to lather up the coat when cutting it? Do you think we should only use scissors, or  perhaps an artsy blade to trim?