I am extremely grateful for the work Antagène does for dogs. This is how I was able to connect Thelma to her dad, Vincacao and will continue up and sideways when possible. It’s high time we proved that when the pedigrees are correct, you can work on selection.

That is another dimension from “just” selecting on O% like for a yogurt…. 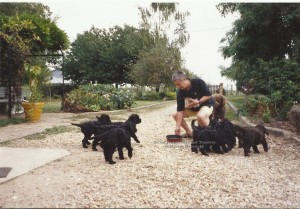 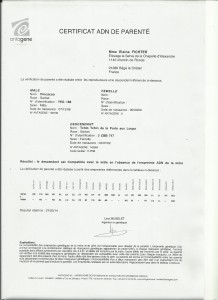 As the story goes, Thelma’s breeder eventually said Vincacao was not her father because breeder did not like his flat coat and instead had used Ratafia a T.I ( Hercule x  Portuguese water dog, Maidi also known officially as Elsa dos Lusiadas). So, I lived with that in the back of my head for years and years and finally the truth is official. It  really was Vincacao. Next step, you will see when the time comes!

Vincacao was brother to the 2 monsters, as they were commontly called: Vetliner and Valençay….so they were also Thelma’s uncles! One can’t pick family, can one.

I think I am the first Barbet “breeder” in France to be able to post DNA compatibility, as proof of my work since my first litter in 2006 (2 years of unsuccessful tries before that). I am extremely proud to be able to share my dogs’ DNA with you. Honesty and transparency is what I have always promoted and the fact that there are other breeds in the Barbet, but I have always been extremely clear on what my objectives were. So clear, that the other day I was asked what the % of Barbet blood was in a particular dog…

I did not wait for the SCC to launch their new program February 25th 2014 to start! I am however happy to see that it served a purpose!

Of course, some breeders (of any breed) will always find a way to convince their way to something non real professional, but tis ought to lower the risk. 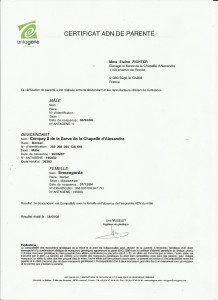 My dogs have participated in research for the breed and along with that, I have always felt it was very important to attest to conformity to pedigrees and ancestry. I am very active in tracing ancestors and types as part of my work for the breed and it’s survival. 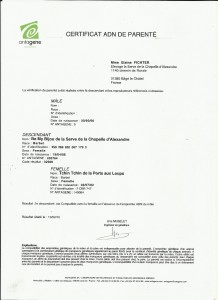 The Barbet is an extremely rare breed, especially in its home country: France. Of course, we had to find blood elsewhere or the breed would have imploded and degenerated a long time ago.The main objective is trying to work to keep the type, the old type in our case, and by that I mean the people working on the old type’s survival ( Vieux Barbet) 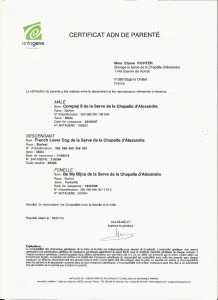 Next Vennie will be done, along with blood sampling sent to research. 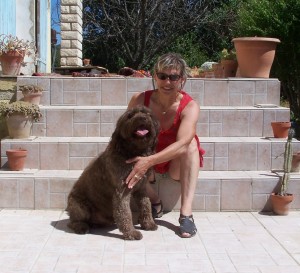 This photo of CH I-Poppenspaler’s Vincacao, a lovely dog and a thought for his sister Vodka who went to dog heaven yesterday and his brother Valençay a couple of weeks ago at the ripe age of 14. Time flies and they’re gone one day. The positive side is that out of 13 brothers and sisters 6 have reproduced, so we have their progeny for the future.Cacao also belongs to Mrs Pêtre, in Tarascon and has done a lot of working trials and contributed to our beloved breed.

Hopefully to be able to establish somehow that, more than just repeating over and over and over that Hercule and Hourrie were not brother and sister..that we can at least show that the H’s were not all siblings. That would be nice.

new pedigrees will state whether dna has been done and relationship with parents has been established.

– les informations de santé relatives aux Affections Héréditaires Invalidantes de sa race et gérées par le club de race concerné, Health concerns from tests will be mentionned
– les informations sur les performances obtenues aussi bien en morphologie qu’en travail.
Show results along with Working trials.
This has obviously been done with the objective to stop ( prevent) fraud.
I am extremely happy about this measure because it will certainly make what is left of the creative pedigrees, come to a screeeeeeeeeeeeching halt.
That, plus the fact that with photographs of generations of Barbets we should be able to come clear.
All Barbets born in France, where it is extremely easy to do DNA tests should be the first ones to have done it, with the breeding stock they have along with any older dogs around.
I know it’s valuable information and worth it for the Barbet’s survival. 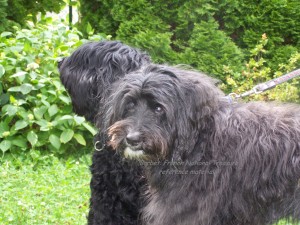 Time not being on our side, it was a bit of a race to get Harz’s( di Barbochos Reiau de Prouvenco) dna. Poor dog was really up there in age. I will spare you the details of a Barbet living til age 17 as some love to claim. A sacrifice for his owner who refused to do anything but let him die naturally.I don’t know if I would/ could do what that poor lady went through out of love. He is shown here with Thelma.
Harz was Hercule’s brother and whether or not we could prove anything with his dna, it was just important to have it. We have it.
A certain group of people did their best to stop me from proceeding to get his blood. You never know…it could be dangerous to get to the truth.Their lovely letter is here:
http://bbfrenchtreasure.free.fr/index.php

It has been a race to get as much info as possible from all the old breeders in France. I think I have done well, considering!

A post about why everyone should start contributing to the research on epilepsy by sending samples to the French University in Rennes. This not being a new piece new of information but one that came out several years ago when some new breeders destined to become famous, were not around. The message was destined to those who had not contributed, yet.
How can someone not have contributed??????? How is that possible???? Well.

The scoop which is not a scoop. I was a bit befuddled because again, I spent hours  years ago when I found out about all the creative homemade pedigrees we had in the Barbet and how the campaign had been started by Mrs Loiseau who at the time was not an elected member of the committee, to sort things out and come true..Since she was elected, welllllllllll not much has happened. Best not to hold a position for the Barbet at the club, they make you become brain dead.So, being a barbet breeder is totally irrelevant and not a reason to vote for one, eh?!

Back to the business at hand. 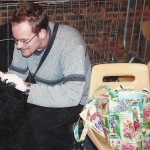 This is a photo of my colleague Dr Grégoire Leroy who, at the time was taking samples for the thesis he was working on. 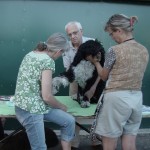 Compay donating blood for research back in 2009. My dear belated friend Catherine, a vet, had been asked to help. 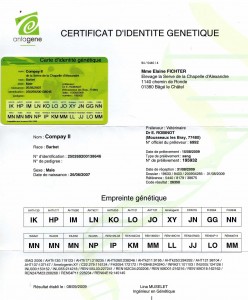 All of my Barbets have contributed to research against anything they want since it’s important to save the “old breed”.Now, if anyone set out to prove there was SWD and IWS in him, then great*. I’ve already said that, too. Others claim they have purebreds, but pure bred what? Working on the “old Barbet” requires investment and sacrifice. Not all willing to contribute. La preuve…….
Thelma’s dna back in 2007.She had her first litter in 2006, after failure with a Canadian stud. 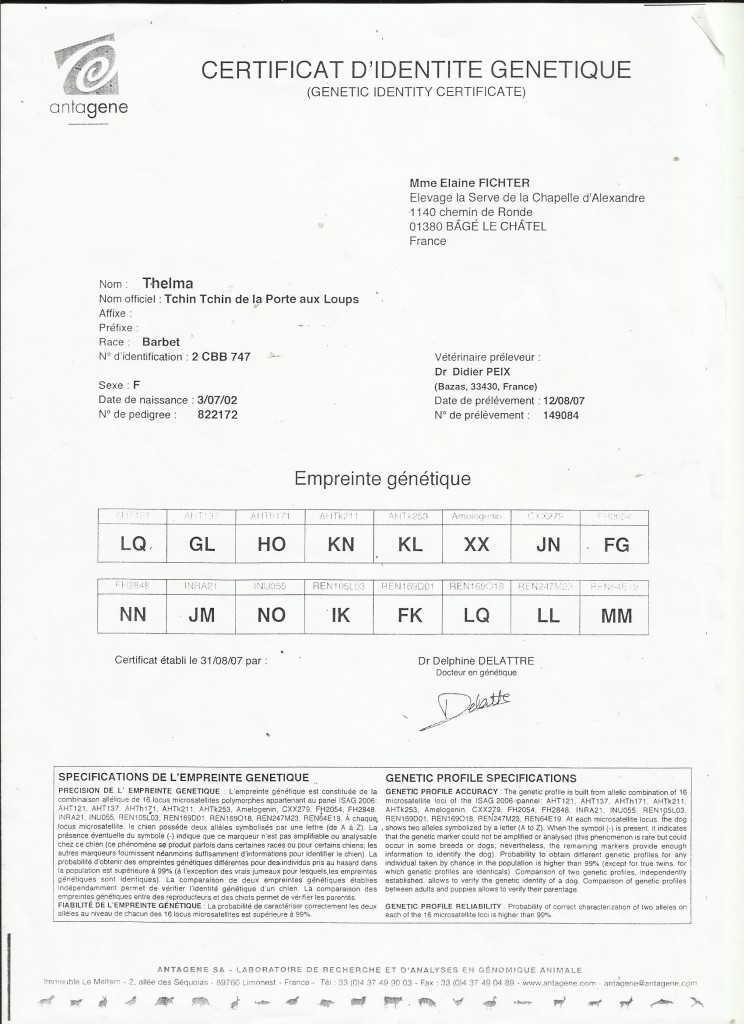 .
All my dogs have dna profile and have contributed to research. Blood is drawn when they are chipped and sent by my vet directly to Rennes.It’s an additional cost, but.

It seems obvious, doesn’t it. Not for all apparently, who will only start with their next litter. What the heck.Our team did several dogs in our pedigrees while they were still alive…they have passed on since. That’s called planning for the future of the breed.

So, pointing fingers and sitting on proverbial butt, leaves me perplex.

* The database we tried to presnet at Symposium was to set things straight. It was shot to pieces….they want the research to be done, those holier than thou people, but do the research on false pedigrees.wth….