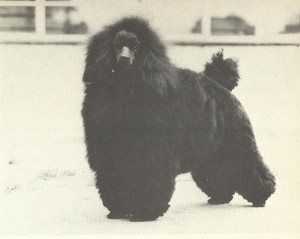 For those of you keeping up with fads and fashion, imagine this Poodle without the face shaved…A Barbet cut as we see more and more? Not sure.( taken from the Batsford book of the Poodle by Harry Glover 1974). Will this be the newest Barbet cut? It appears so.

Below video is far from rustic, but very much a hypertype mentionned at the Symposium in 2012. I got it like many others, throuygh Google Alerts.8/2014. I would like to share it with you. Those extremes have also hit France with extremely matted ungroomed coat hitting the show circle.

The Barbet is groomed many different ways and often it is hard to keep up with the different styles. They have been extremely creative from shaving the entire dog to having it look extremely poofed out. 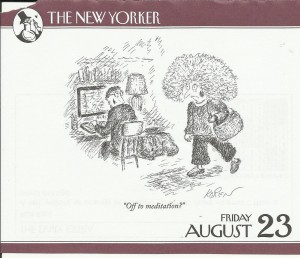 A hypertype hairdo…for a woman, you would turn around and wonder an afro?!! For a dog it’s the same.Why do people do it? To get noticed, yes. It’s probably the same in the show ring for dogs.

The Barbet can be easy to groom or a complete  nightmare,  depending on the coat type it has( and your experience). Over the last 13 years, I have experienced the 2 major coat types: extremely frizzy and open curls. I do admit I prefer open curls. I am not a professional groomer and I do not have a  budget to take dogs to the groomer regularly.

When I have had litters, it is a point I pay particular attention to the coat yes, but as part of other points, and since it is a major preoccupation for many over any other aspect of the breed: the coat the coat the coat, you try to use basic logic.

I think coat types should be complementary when mating, so as not to accentuate the tight Poodle curls we have seen a lot of in the past, and to make our dog with the rustic look it is supposed to arbour. The Poodle coat is not the only one having had an influence on our Barbet, rustic dog.The Portuguese water dog is also there, as below so we mustn’t always blame the Poodle! 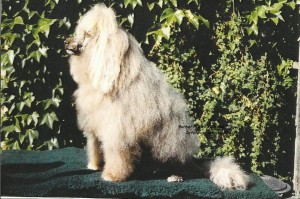 As inherited, in the photo below in the V litter of what Georgy called the “Monsters”: 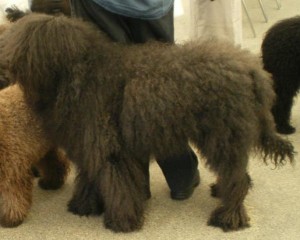 There are also references to how the Barbet coat should be. Ours are French since the breed is French and the following information is taken from the SCC book: 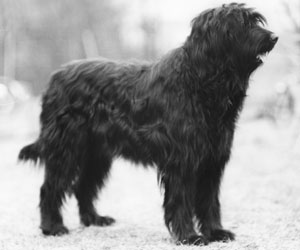 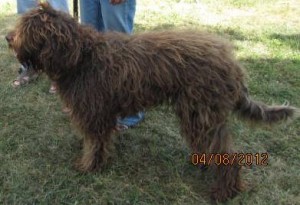 P67 Quasiment disparu après la première guerre mondiale. (quasiment means almost) If your Barbet has a curly coat ( what we call open curls), like Coccolina below, then it’s rather easy to keep up.You really just need a big wide tooth comb to start then a narrower tooth comb to finish. The shinier coat has less undercoat.

Keep in mind that the Barbet does have undercoat, that was probably the reason it was used in so many other breeds: to supply protection when working in water. 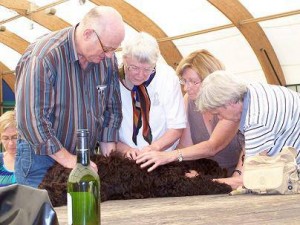 There is again talk about “hypertypes”. The subject was brought up by Pr. Denis at the Symposium last year. The Barbet being a rustic dog, it is not supposed to be groomed “à la Bobtail”, meaning all poofed out.

It is a rustic, run in the forest and go swimming dog. Booly Wooly ( tight frizzy coat): http://www.dailymotion.com/video/xntsnb_a-hard-coat-to-manage_animals

………And whe’n it got out of hand, he was shaved. A bit too close to skin, which burnt the hair from the heat of the razor.Not fun and poor dog… 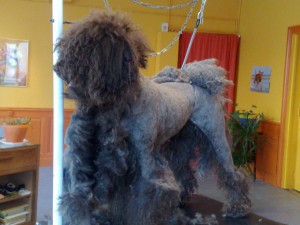 This is the beginning of a hypertype. Booly Wooly, is much more difficult to groom and here with just a comb, you wont succeed. You need a “Pooch”.

The red one is probably the best one for this coat, which is frizzy and does not show any curls. It’s expensive, but well worth the investment. You can find them here and there perhaps for a little less. http://www.lespoochs.com/brushDetail.asp?inpItemCode=BM%25

For pups, I have never shaved them at 4 months as some people commonly do. I feel it is part of the beauty of the dog, having a long coat. It starts at some point to get thin on the end and that is when it needs trimming. I have seen Barbets shaved like Labradors or Braques, especially when they start getting matted around the neck, on the ears…then you start chopping away with scissors and you’re in trouble because the matts are dead hair. The groomer can then do nothing except cut everything as below!

When you use scissors, get good ones! http://chiendeaufrancais.com/articles5.php?pg=art38

The Barbet is not a sculpted dog. That is groomer terrain and extremely costly ( 150€ and up for styling). You never blowdry a Barbet. You can blow off the water, but they must dry naturally. Let them be in any position they want.

The newly elected club committee in 2013, is bring attention to the hypertype problem in Barbet grooming. For a long time it was said( rumour, rumour started by JC Hermans) that many dogs in France ( mostly) were shown matted. This is still sometimes the case, but it is less and less.Update: in 2013/14 dogs shown in France were often shown in “their jus”( meaning matted) which is rather an insult to the breed. Judges not knowing the standard and that is how disasters start.

This is an extremely matted Poodle at the turn of the last century. We now have those types at shows in France.2014. 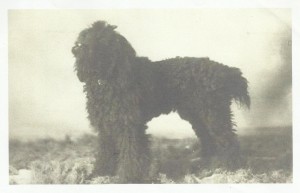 Thius is a shaved Poodle, and you can see many Barbets with this type of coat. Generally they are shaved, because it is extremely difficult to keep a long curly coat on them. This is out of standard and a trend started by the Swiss. 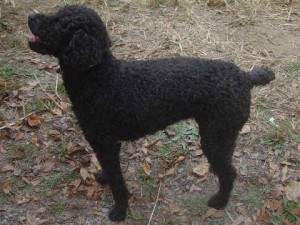 The comb must be able to go through the entire coat, to the skin. You should be able to see the skin. There is undercoat to protect the skin when swimming in cold water. The French Club has shared a document about hypertypes. Below.

For another view on grooming: http://www.barbetchasseurfrancais.info/coatcare.html ………..and eyes, not being completely covered as it is harmful to your dog’s eyesight   ( also said during symposium 2012). Many still ignore these recommendations. 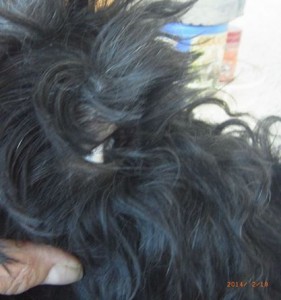 Keep in mind, you Barbet’s adult coat comes at about 3 years of age. If it is a bit dry, give him or her some salmon oil each day for several months OR rapeseed oil ( a small spoon a day) http://barbetchasseurfrancaisblog.weebly.com/1/post/2012/06/to-see-or-not-to-see-that-is-the-question.html 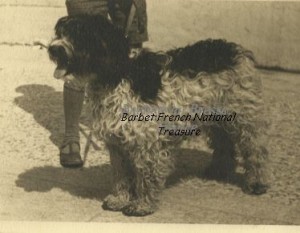 Bottom line and as a conclusion, this is the type of Barbet type we are working on saving from extinction. An old French gundog withan easy to maintain coat. A coat you will enjoy running your fingers through and is actually quite therapeutic! The 21st century type is the one below, of an authentic Barbet, Old line, Vieux Barbet! 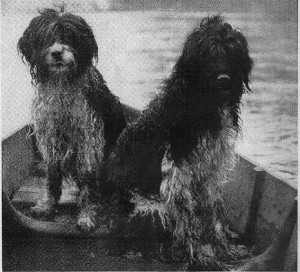 The Barbet is a rustic gundog who loves water. Make him or her happy and let them do what they do best!These 2 are from M Le Houelleur, in the 30’s on the Dordogne river. And because the Barbet is not just a coat:

People continually ask me what to do with their pup, and should they shave them at 4/5 months? What on earth for? A puppy is lovely when it looks like a Teddy Bear…The coat is not going to get thicker, they have the coat they inherited. What is good to do it cut off the thin bits on the end which get thinner from brushing then. You will see the adult coat growing under it, if you look closely. Cut off that part and don’t make you dog look like a Labrador! It’s embarassing for him and a shame for you who bought a dog, which according to standard, HAS A LONG COAT!

Of course if you have a poodle type, well you may have to start earlier, but enjoy him or her while you can. http://barbet-frenchwaterdog.com/of-coats-and-crosses/coats-and-tangled-webs/

I have added this link, from my old site. I am sorry for the size of some of the photos, but IF I change them, the date will change, so please bear with it! The point is that when you cut the body down, make sure the head and tail are in proportion. The head should not be poofed out like a Q-tip or worse, but in proportion to the rest of the body. NEVER shave the ears but trim the bottom and make sure the hair from the top of the head gradually goes down on the ears. The head hair is not the ear hair. Beard also should not be hanging down. As far as the tail is concerned, do not have this really long scraggly feather duster. Keep it in proportion to so both “ends” are balanced.The tail should look rather “thick” of even length from top to bottom and not like a Golden Retriever, either. I never use l a coat king, because from brushing it so much it makes the hair look frizzy, which is not aesthetic.One should see the curls coming down on the body. 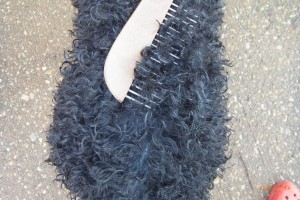 Natural/ Rustic/ LONG are the key words for the Barbet’s coat!AND they should be able to see…cut the hair over the eyes so they have a possibility to see through the hair hanging down. http://chiendeaufrancais.com/articles5.php?pg=art39 If you have questions, feel free to ask! mollymae@wanadoo.fr

12/12/14: a comb you should be able to find: wide tooth and when you have done the wide tooth, then the narrow one and then of course, you wet the dog to get the curls back ( IF the don’t come back spontaneously as they should) and a tool to clean teeth. I usually just use my nails, but my dentist offered me one of his old tools… 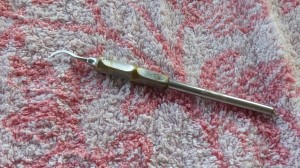 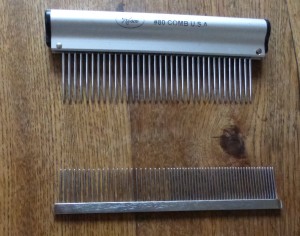