The Club bulletin managed by the ex-pdt of the Barbet, Lagotto et autres CE, n° 104 of March 2013 stated that the report would be available for purchase at the French Championship show which has come and gone. There was an aborted attempt at publishing it just after the elections where “they” had lost the hook, the line and attempted to save the sinker. The webmaster published it without the new committee’s approval. The webmaster being u-no-who and the order given by his mentor.

Well, that got squashed. I read it was 80 pages, but these 80 pages were seen by no one but the ones who transcribed it and in them, can we trust?HUMMMMMMMM. None of the voices on the MP3 were consulted to yeh or neh its contents…meaning the new popp breeder, and the belgian national shocked at the questionned homemade pedigrees…or myself  alledgedly made responsible  for a database that does not correspond to the non-official one that is a reference for many who would like to believe.

Anyway, what’s funny is going back to last October at the BCE in Lorris, interesting coincidence…The woman who got the show her Barbet in Paris at the Salon Agricole was the one who was standing there when pdt said the MP3 was illegible and when I said, ” “of course, you must have copies of the recording…I can’t imagine paying so much money for something and not having a back up…”haha. The woman was looking at me most strangely because I was for her “super Zebulon” and she obviously had gotten forcefed some slanderous propaganda a few minutes before by one of the Barbets’ u.i’s.

Oh, and speaking of u.i’s, if you want to see feedback, I say see, because it is illegible translated by google, I can have you  read blondinette’s Symposium report. I say blondinette because it is not signed as all of the documents they publish. No one wants to take responsability, must be in the club culture.

It’s a very condensed version, probably corrected by the Fonzy team, although I even here have my doubts. It’s on the Swedish bb clubsite.Here it is below for your reading pleasure.

Minutes from the meeting:

There is no change in the standard regarding the coat. The coat should be thick and long with woolly / kinky hair.

It should not be shown a photograph of a Barbet in conjunction with the standard. A photograph is just a picture of ONE dog and shows only the interpretation of this particular. Therefore it will be a cartoon sketch or the like.

Question from the audience:
Why reward a certain type of dogs at a show before others?

Barbet should not have lumps / felted test that the Spanish water dog has. But if the coat does not brushing so formed the tangles that eventually becomes the long test, this should not have Barbet. It will be curly.

An audience member takes up his dog and shows that it has been testing the coat. The dog has wavy hair. Come comforter from management was that the testers were very unobtrusive and does not have anything with fur type will do, but if the coat does not brushing so formed these tests / tangles.

Extremely curly fur can mold testing, but it is a shaggy coat.

Two types of hair (wavy and curly) is displayed to the question of the fur which is preferable?
Response from Management: It does not matter, both are approved, both dogs in question have long thick fur, and counts as woolly / kinky. If the dogs of exhibition, it is up to the judge to judge, and then it’s all about personal taste which vary from judge to judge.

The coat should not be thin and not straight / smooth. Straight hair and coat without undercoat is undesirable.

The coat can be both glossy and matte

Fur structure is more important than the color

Management disagrees with “grooming” the Barbet.
Barbet will look natural and will not become a new poodle.
They disapprove of the developments taking place in some countries where Barbet has started to go up on the grooming table for exhibitions.

At the show, the dog should be clean and minimal brushed

Question:
Can you show Barbet at a show or strive everyday to barbet can see? Under the standard, Barbet have much hair on the eyes so that it does not see everything that happens.
Response from Management: You should make sure your dog’s health, it should not be a problem with the hair on the eyes. Anything more detailed response was given.

Coat color and color of the skin should be the same

Mix of colors present. Colors that have been back in Barbetens history and arising now must be approved. New colors and color artwork that has no precedent in the history or arising from the results of korsparningar is not approved.

Tvåfärgeat and trefärgat is not approved. Barbet can have two colors but one color should be dominant in the whole body.

Epilepsy-a genetic problem
Currently, no DNA tests that help. It is hoped to researching it in the future, but that will require a lot more blood samples from Barbeter. All dogs are overweight and have a unique set of genes and it is important that all dogs have a blood test.

It is believed that there are two types of genes that cause epilepsy. A developed at an early stage when the dog is young / puppy and the other develops later in life when the dog is older.

Carriers of epilepsy is not a disease, but can spread the disease.
In the future it is hoped to test which dogs are carriers and which are free to reduce the spread of epilepsy.

Both parents must be carriers of the gene for the disease to break out.
You mate two dominant carriers becomes verdict about 6/8 sick of offspring. The offspring who do not become ill may be free or carrier.

Inbreeding has bad effect on breeding. An individual shall not practice used in breeding, this would be a carrier of a disease becomes critical situation quickly and spread of disease is great.

Texts of the 1215’s, describes Barbet like a dog with long, curly, thick fur that likes water.
They do not love to swim in the open sea, but in small mud pools

Barbet to hunt with a low nose

1938 recorded the first Barbet in France
1949, the five registered Barbeter

The first breed standard was written in 1894, it has since been amended four times and the last one is from 2006.
The standard describes the ideal dog to be pursued.

The new standard will not the word “eliminate” to be included. This is because the word has been distorted.

Only the French standard is the right one for Barbet.

Barbet should not be divided into two “races” such as new and old bloodlines. All are Barbeter equally. There is no “pure breed” in any race. The focus will be on health and temperament and bloodlines and looks are not important.

Many dogs are smaller, and the size will be reduced. But for breeding, this is unimportant because they are born too few Barbeter in the world. The size is a trifle that should not be important, but one can strive for something smaller dogs mating on the possibility of there.

Barbet should be balanced.

The exhibition can judge have the right to disqualify aggressive dog outside the ring.

Both aggression and shyness is a defect that should not be pursued in breeding. It is especially important to not use aggressive / timid dogs in small genpoler then it can easily be inherited.

Sick dogs should not be used in korsparningar, use only healthy individuals and healthy offspring after them.

Very important to check the health of offspring from korsparningar

It is involved poodle, Spanish Water Dog, Portuguese Water Dog and Irish Water Dog in Barbet. Poodles are not recommended for cross-mating. There are both advantages and disadvantages to using a water dogs by cross breeding with Barbet.

Before a cross mating is done, you should always apply it with the FCI as. 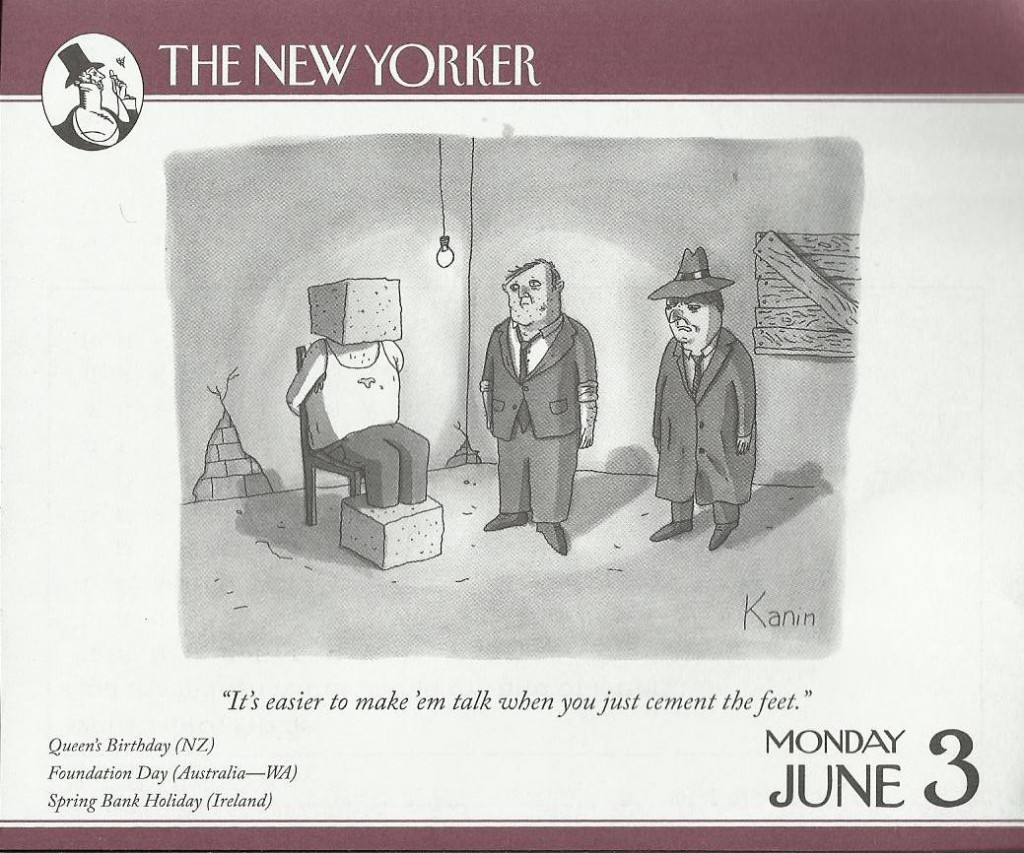 So…now we are waiting again for its publication because it is going to talk and it will most likely say what many don’t want to hear.

Don’t you just love the New Yorker cartoons? They keep me in a good mood!