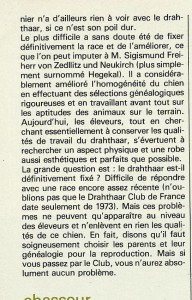 Were it to be saving the best for last, it would mean that the whole Barbet story would be close to the dénouement which it is not.
In this article about the Drahthaar who, by the way, has Barbet blood for the undercoat it bears,( yes a Barbet does have undercoat!),it says, I kid you not:
“…the breed is not set as it is too recent and that the problems can only appear at the level of the breeders. That of course takes nothing away from the qualities of the dog. Let’s say that you need to be real careful when selecting parents and their pedigrees for reproduction. BUT, if you go through the club, you will have absolutely no problema….

Between the club who has not a clue as to what is going on ( too busy with politicking) the Ukaze breeders running the show (terrorism of other breeders) and bimbo-nets wanting to talk about Barbet illnesses (which Barbet, I say: the Poodle x Poodle one, the IWSxPoodle one, the Poodle x PWD one, the SWD x Poodle one, the PWDx IWS one?) The one that went north, south, east or west?
I think you got my point…later we’ll talk character, since they different breeds have different characters and ability, too!

So far,notice we have not ever mentionned the Old Bloodlines/ Vieux Barbet who was still alive in 1970 in a remote area of France..despite the claims that the breed was extinct and “they” are saving it from extinction!Are you confused now?

Bottom line to remember:
The % of barbet blood in the Barbet is inversely proportional to it’s size.
The more blood Barbet blood it has, the smaller it it.
That also was a subject for the Symposium.
Have a good day!