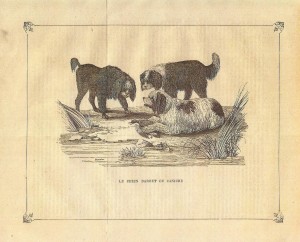 At the time, before breedes were fixed and standards were written a chien Barbet was a poodle, a dog with a beard and a long coat…however when standards were written, the poodle had its own and the Barbet———— which is not a poodle—- had one, too.It was a gundog in the 7th group and even if it swam better than it pointed is was not and is not a couch potato but a working water dog.