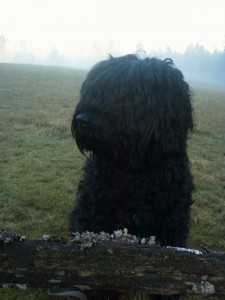 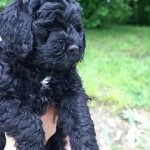 He went from Belley to Mâcon, to a new owner who could not give him the attention he needed. He ended up in the south of the USA where he was waiting for his mom to come home and to make a real long story short he was adopted by a loving couple who drove across the USA to get him…

Yes, you feel old thinking that you’ve followed a dog ( not of my production) and his welfare for almost 8 years. I am proud he is doing well where he is…I get news regularly and they are very much appreciated.
I also was asked to keep La Lula, his sister ( Bepop) til she went to the UK at 1 year of age. Thiose were extremely busy days. Having all those dogs around just commes so naturally!

She was treated just like she was in the family, went to shows, got her TAN… 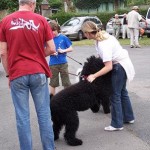 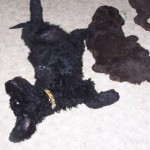 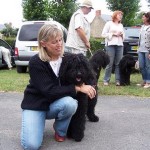 Here shown with Jennifer and her owner; with Guyguy in the middle and with me at a show….I was close to that entire litter since I placed most of them in 48 hours for 150€ each…imagine that happening today! The person who had had the litter was expecting them to be taken in a minute when they were born and it did not happen( still does not). Imagine how things have changed when now you can pay up to 2100€ for a pup!

What a nice souvenir to keep in touch with all these Barbet lovers…people working so hard for the breed and its survival.