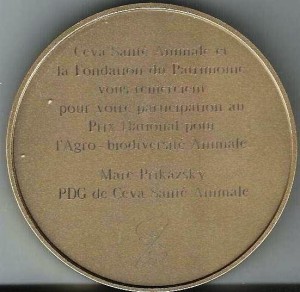 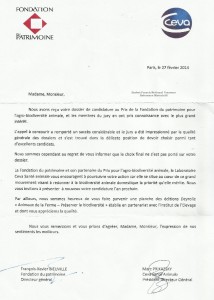 The Barbet is not doing well in its own country. French people generally have no clue it exists.  The reason why I filed a dossier with the FONDATION DU PATRIMOINE is to draw attention to our poor breed as a gundog, waterdog and also a companion. I did not think we would get anywhere, BUT at least we are on the map, and I will continue to fight for the breed where the club does not, since they really have not a clue what to do with it.

I am honored to have received a nice medal and perhaps next year, we will get somewhere as I will continue as I have for years.

The breed lacks anyone being an expert on it at the breed club, and France overall being in the state it is…it’s just a reflection on the rest of what is happening in this country. It’s a mess politically for lack of anyone deciding to do anything to change anything and take any responsability, or ask for help. So, that leaves it wide open for other countries to take it over. Basically, the country… has no balls to do whit is necessary to put the country back on track. France has lost its grandeur and its splendeur and our leaders pretend all’s well. That sums it up. The club spirit: “all’s well, we’re winning”!