Dear Carmela
Since this morning early when I read your pm, I have to admit I have been torn between extreme sadness and very extreme anger about the death of Ela Samba. It was an accident, ok..or not ok, but she is gone now. Yes, she was your companion who followed you everywhere and always wanted to make you happy and you will miss her sorely and and..and yes, 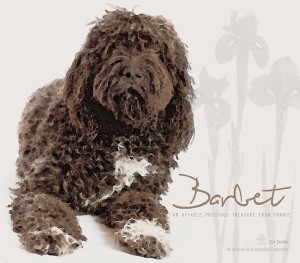 … she was born in the wrong kennel: mine. She was through you, hasseled all the time, by that Swiss Kräusli club where you do what you are told, lay low and shut up or you are out. You never accepted that because you fought for her and through her, you fought for the old breed or Vieux Barbet which she represented.
She was the symbol of your resistance to Renate Zuber who has always made sure people were to stay away from because your dogs were badbadbad..since you did not want to be submissive and 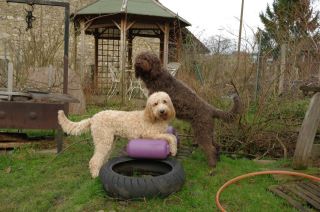 accept her “rules”. So, she threw you out of her Kräusli club..to make more space for her own master race and not answer any questions. I have said in the past and repeat..eugenics as a way of breeding to eradicate the old breed, is not “just” a historical concept.
Ela Samba will live on through her progeny and through Arlan de l’Aubépine..a feat not many will have ever accomplished and she did it. Thank you for all your work for the Vieux Barbet Ela Samba and Carmela. My heart and my thoughts are with you.

Retaliations being part of the Barbet world…it has been extremely difficult to support the old breed or VIEUX BARBET and those people who venture down that path..at best get slandered and at worse? Their dogs get badmouthed as “sick“..

Voilà, voilà. Nothing more to say, but the proof is there.