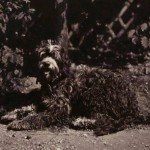 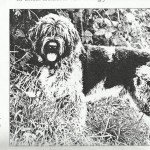 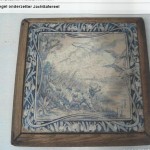 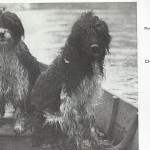 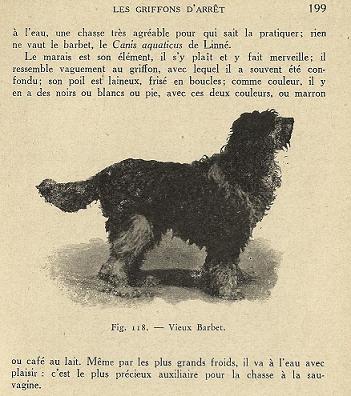 …Starting with the Griffon on the right. The Barbet needs to look different from a Poodle, a Spanish Water Dog or a Portuguese Water Dog ( which is the one he ressembles the most, there are 3 Porties in the Barbet) to survive, it is too small of a breed in numbers and really has no reason for being… anymore. Being realistic about the whole evolution! I filed a dossier at the French Fondation du Patrimoine in 2013 and was told I had to emphasize its working ability ( meaning hunting), by Pr Bernard Denis, one of our eminences grises at the SCC.

Well, as expected, they thanked me for the dossier and rewarded sheep and goats,

( and rightly so) threatened with extinction. What to do with it? Not much….? Or do any of you from other breeds have any ideas because in ours, there seem to be none other than promoting one’s own dog who is the greatest since the world of dog was created: 1860’s.
I am continuing, regardless, but I do think we will get nowhere, since the situation for the breed has not changed much in France since 1980 when someone decided to re-incarnate the Barbet de Buffon of 1766 by crossing  pseudo Poodletypes and LOF Poodles and leaving aside any SCC/LOF Barbet stock available. He had friends at the SCC who closed their eyes back then. True that the breed is doing much better outside France ( Canada, Scandinavian countries, but for how long?). It is mostly shown ( not used) as a poofed out overgroomed hypertype ( dixit Pr Bernard Denis 2012) to get attention at dogshows, only…and perhaps promote club “spirit” whatever that means in a social club?

Anyway…At least one day, I will have a nice story to tell.

The Barbet is having tremendous competition, if you can even call it competition, from the Labradoodles, Doodles. Those designer breeds are far more popular than the Barbet will ever be. The French breed club wants ther breed to be a hunter in 2014 and again, even a hundred years ago, hunters preferred English breeds to the Barbet, for obvious reasons (coat care in many cases is horrendous), since it was known for mostly only being a duck dog..the situation today, until it can be proven that it is an all around hunter/gundog as some said it really was, in the past. There are very few who can ” really work” and the VBBFL ( German breed club) has recently changed requirements to be confirmed, by adding a pointing/land/water/bloodtracking test. Unsuccessful test=> no reproduction.

The only requirement in France ( other than hips and social test) is retrieving a plastic dummy out of water TAN, which not many fail and sometimes it becomes the owner to retrieve it (cqfd 2012). The club has modified the standard several times for diverse reasons and communication with the decision makers is basically impossible since the are mostly promoting the Lagotto ( but we knew that).

That is is in a nutshell, what is going on in France. Abroad, it’s not much better as the club is mostly run by some Y generation ingenues who haven’t got a clue about the breed except to get CACIBs at shows and make socutesonie litters.

I also forgot a minor detail…the cost of a Barbet: Germany /Sweden( could be more) 1600€. Swissland 2100€. France 1000 to 1200€. Absolutely not gundog prices for dogs who cannot prove much hunting lineage or ability. Who wants to pay those knids of prices for a dog who can prove nothing other than he is the son of his mother?

The French breed club, repeating again and again that the Barbet must be a hunter, not specifying with who where or what is certainly not worried about history since they apparently don’t know about the history of the breed since the SCC ‘s history, hence the club’s is completely wrong and that seems to worry no one at the waterproof French breed club.