Grooming dogs (or overgrooming them) in a creative fashion has run havoc in many a breed. It’s now our turn for showing over poofed styles that get attention in the show ring but are not acceptable standardwise. A Barbet in our day and age, contrary to the 16th century when the barbet species regrouped anything with a long coat and a beard, is NOT just anything under the sun, now. There is a standard to be respected, despite the fact that grooming it is not real clear, the word rustic, having been taken out.

* 10 cms is not a  lot…when you have to pull the coat out to measure the length. 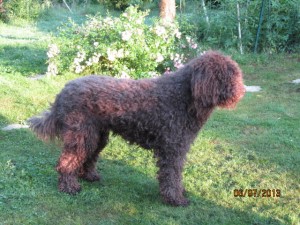 ** no undercoat…the barbet does have undercoat and that has been discussed most informally…that is what protects it when it goes to water and the reason why many breeds have ( generic) barbet/poodle blood.

Since we have not many people concerned with the French breed itself in France, the breed being run from abraod, it is really hard to sit down and talk with anyone since most are not at all interested in the breed ( for lack of research) but just in their own dog, or production. This is not a scoop.

The standard is supposed to be accepted and commented by breeders before it goes to press. As far as the Barbet breed is concerned, in 30+ years that has never been the case. That being the reason why it is degenerating into being just about anything under the sun. Having 50 dogs under one roof at the same time, it’s easy ( easier) to see what is “in” the dog itself and lines come through very clearly. The contrast is blatant, physically and behaviourwise.

One Barbet? Dream on.