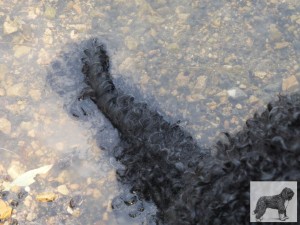 About the Barbet chien de chasse..

I had in the back of my mind what Pr Denis told me in 2011 about helping the breed survice would be through making it a hunting dog again. It doesn’t happen overnight and I am told you need support from the hierarchy. If I had decided to wait…so, I went and did my best. Well I got no help, from no one in France concerned with the breed.  Judges at first looked at me like I was a zombie, but decided the woman had guts.All the parameters have to go together.It takes a lot of time and you can’t burn bridges. Doing just a BCE was of no use for the breed since no one in this day and age needs a waterdog…I have said that before! 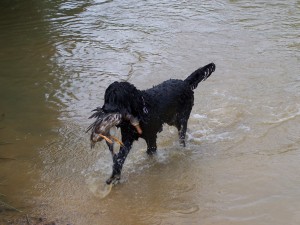 When I decided to start doing some  real work/ BICP ( hunting work 7th group land and water) with Froguette and Froggy…I had set as unique objective to show people a Barbet was not just a couch potato or an overgroomed show marshmellow and have people see it and talk about it,eventually and for it to get to the top, meaning the SCC.

So, I trained and trained and trained, because you don’t “just” do it overnight. I asked questions in as many places as I could. Much of my help came from a friend in the UK and from a book she had sent me. Then ther different judges were extremely cooperative ( I was not used to that). It was a real pleasure. Really great doing different BICP’s across France, and I did it because it was an objective regardless of cots or hassel ( which it was never).

interesting too, different work, but Froguette was “used” to 7th group work.

We did our las “working test” this spring, for fun. And also to prove some, that anything is possible when you set your heart and mind to it.

My only interest is what happens to the Barbet. The rest, I let others deal with their issues, since I had decided not to wait to them to get their act together. Enough time has been wasted.

I finally took the time to sit down and add up how much it cost me to do:

4 BICP chiens d’arrêt *( 7th group) where, yes, I did have to convince the organisateurs  to accept me on the basis that my dog could do some things and that we were not there to win, but to show the Barbet could hunt/swim/retrieve on land…as the original standard said it was a chien d’arrêt…since 1886.

Some people said to me, “no, we don’t want your breed”. Some did not answer my emails, but the ones that did were very kind, and happy to include a dog that was really rare. The judges were REALLY kind in explaining things and letting us do our best. I, of course, had planned this out and gotten reports on how the Barbet hunted since not a soul could tell me.

No one laughed at us. People were very supportive and gave us hints and told me how courageous I was… ( probably more stupid than courageous, but that was nice to hear).

Then, to see how a BICP retriever was different, we were the first Barbets accepted by the Retriever Club de France and the organisateur, Mr Jumeau who did his best to get us a report, not official, but that had feedback.

Finally in 2015, a retriever “working test”..this is where I realized Froguette was used to 7th group work.Anyway..no very elegant or French to talk money, but.

Last week I heard that the had been a meeting at the SCC and the Barbet…was talked about. I hope it was more the Barbet than me since my name at Lamotte Beuvron, Game Fair was at the beginning of every sentence!

Since, Hunting tests have been organized for fall in Germany, and people are interested, not in a tiptop hunting dog, but a nice dog you can take hunting a bit and who is a fabulous family companion. I say ” mission accomplished.”

And I did it with my dogs and for the breed.