When you want to buy a Barbet, you definitely need to do research on what you “think” you will get…and the Barbet world is full of surprises.

I put this video together ( who else would?) because it’s important that when you are acquiring a companion for 12/15 years, you know what you are getting into….

Many say as little as possible and ride the wave of the “rare”and “help the breed survive”….

When all is said and done.. Coccolina is hanging in there and so is GuyGuy. Some days are better than others. He eats ok +, depending on the meal and the day, which I very as much as possible, within reason. He still demands his walk even if I have to hold him real tight, he trips a lot. I help him get in and out of the car. He can be knocked over by another dog, so I have to watch him closely when he is outside. He is very aware of everything that is going on.

I am sharing this with you because it is really important to be aware of. He is going on 13 and Coccolina is 14+.We do not have a lot of records of how long Barbets live and of couse which lines..
Neither take any medication for anything, but I do give GuyGuy what I can every so often to help him move more easily..and I massage him every morning before he “gets up” and even then, I help him stand up because like old folks, he is stiff. He weighs around 23k which is still what he has weighed most of his life. The steroids are helping him stand properly and probably move better too.
Nothing to say about Coccolina..she is a trooper!

There are a few pups still available.. 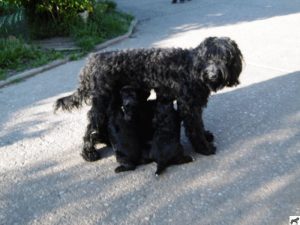 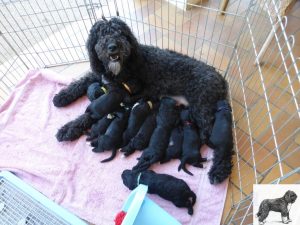 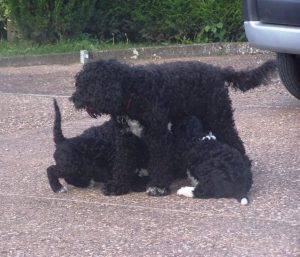 What a nice souvenir of a very very homogenous litter..

By that, I also mean all the dogs concerned are living under the same roof. That is not an easy feat to accomplish. You definitely know the dogs and their personality.

This is my friend Walda in the Netherlands.

This is where Isabeau ( Iabada) von der Leibrücke comes from. You look at the pups and you see how homogenous looking the all are. That is a sign!

If you were wondering how the mating went back in September..have a look!