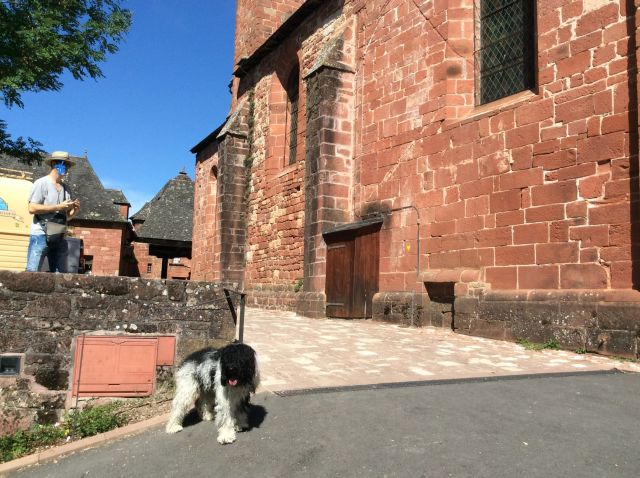 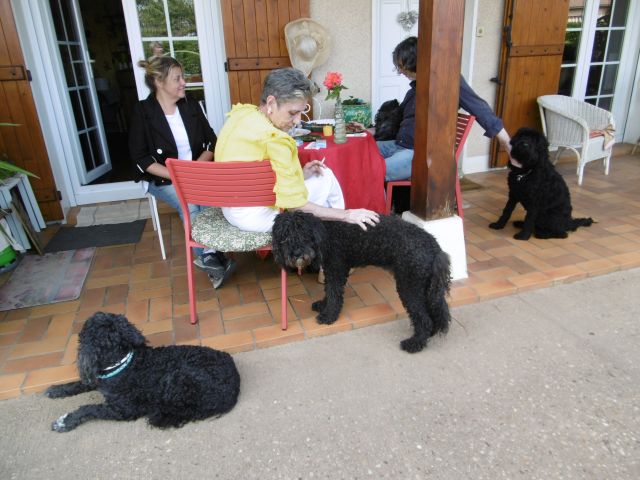 We all stopped talking to watch… 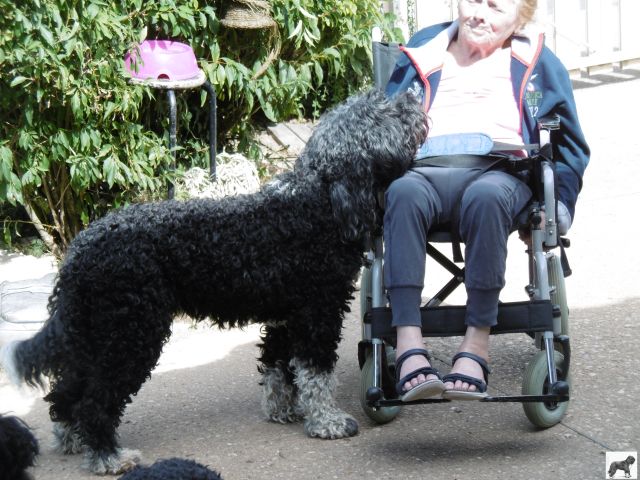 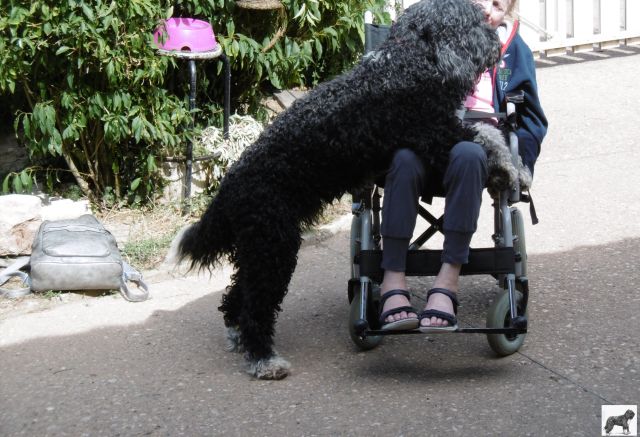 We did not have to say anything. He sensed it. So he put his paws up very carefully..and klet himself be touched. Very moving moment for us.

I am one, maybe the only around in the Barbet world to show such continuity over several generations..it even amazes me. These are all males..

GuyGuy was having aches and pains as we all do at a certain age..he seems to be all better now and ready to train me..Coccolina going on 14 is doing well. Suffice to see who is panting..An added dimension to having dogs stay fit.

The bad things they did to you.

The other day..on a social network, something came up about nastiness in the world and the generic response was “it would be so nice if people got along”.

So, I responded that it would be just nice if just the people in the Barbet world got along..(haha).

My mind wandered on to thinking about a top 10 list of nasties and had a hard time squeezing the offenders in. Trying to condense by country, and ones still alive, was not easy so I tried re-grouping names of countries ( or nicknames)..Here goes!

You see, we’re already at 10..Not even mentionning the US.

Maybe I should count clubs? They alone have done more damage together, individually to the breed than any individual working on his own.

You wonder why the breed is a mess? Thank you all the breed clubs for the maketing and massacre. People are finally waking up to what I have been saying for 15 years…which I will not stop saying even if they don’t like it.

A day, any day can become a real challenge..with older dogs. Guyguy had not been sleeping well as of recently..I was not hearing that “ahhhhhhhh” sound one has when you/he hits your/his pillow..he was tossing and turning..so I thought there was something not right. Osteopath came very quickly..and hopefully by Thursday he will feel better. No cardio training tomorrow for him. He is eating well and appears to have enjoyed the attention..as he always does. He is such a charmer.

I think I am much more aware of all this now, because I have aches and pains..too. 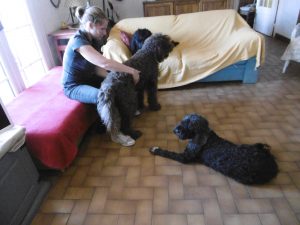 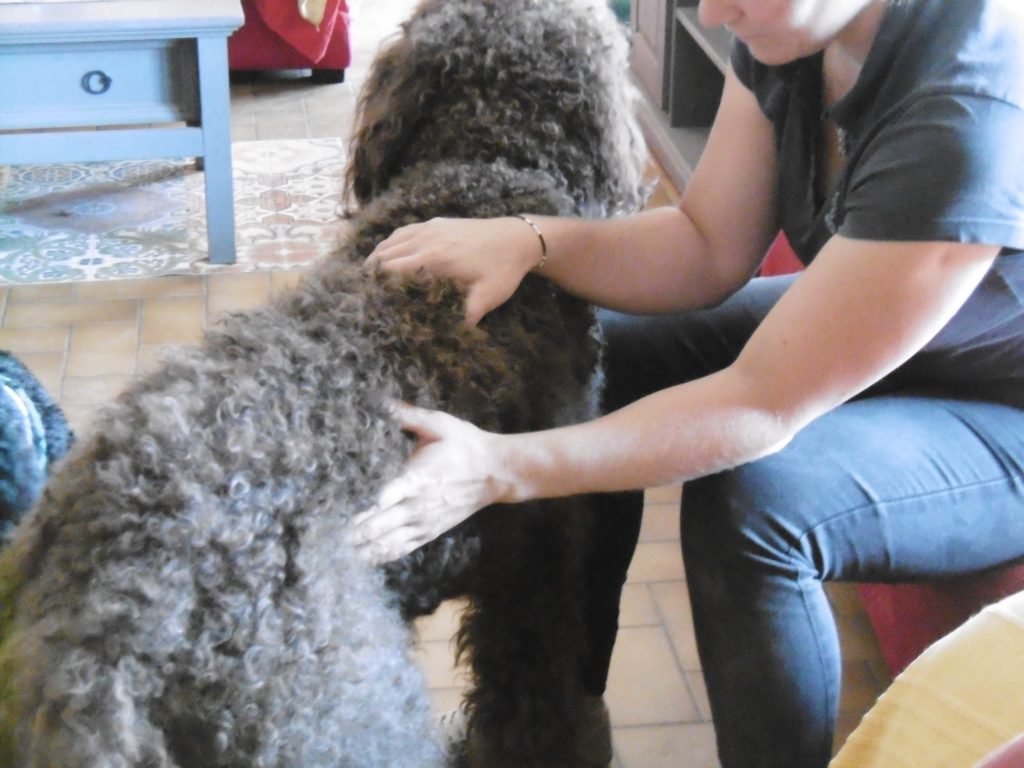 I hear people telling me about old strain ( vieille souiche) or old blood, and how ALL these professional breeders here and there are working on “getting the old strain back”..and I try not to scream. That is honky bs. HOW?

I have been getting calls/emails for puppies, from France, EU countries and as far as the West coast of the USA..People, please be a bit more aware of what you are or not, asking for.A breed threatened for extinction cannot be mass produced!

Below left is the cousin of the old strain of the Barbet, the Griffon Boulet and the Griffon Barbet are first cousins. The dog on the right could be a cross between a Poodle, a SWD or the likes. It has nothing to do with a  Vieux Barbet (vieille souche/old strain). Now if all you want is the name “Barbet”..then ask for a Barbet Moderne which is a new breed re-incarnated by JC Hermans in the 1980’s by crossing Poodles. It’s equivalent to a Labradoodle. That is not what I do, nor what I have under my roof, meaning 5 generations of  Vieux Barbet/OLD STRAIN>>Vielle souche.

Many people claim Vieux Barbet in their key/TAG words, only to sell you a lovely Poodle-type. These lovely professional breeders are everywhere, even where you think you are safe. Their mission is to sell you what they produce…only.Your dog will most likely grow up to look like a NICE Poodle, but no way a Griffon Barbet ( Vieux Barbet). Call it what you wish, but it will not happen.

Lastly, for those who do ask questions..:having Ulysse in a pedigree is a sign of nothing, and certainly NOT breeding for the Vieux Barbet..

You will not tell me that the 2 dogs below are related. They are not.This is where JC Hermans, in his better days as a pseudo “historian” led everyone to belive that 100+ years ago, the Barbet was no longer a barbet but not yet a Barbet..it was out there, in limboland ( next to LalaLand..) where all socutesonice dogs crossed and became Barbet MODERNE..I was fed that line, until 2002. Then I woke up. It’s time for you all to do the same. Better late than never…before you rush off th get the latest designer..Barbet. Don’t say you had not been warned. That is another reason why I do not recommend breeders..and certainly not in France. 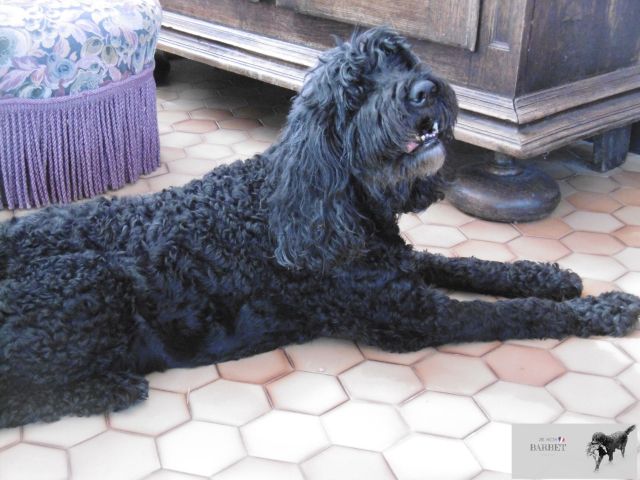 When you see “key words” that advertise Vieux Barbet and show you pictures of puppies with very curly heads, high ears and a small head..that is misleading advertising. You work for ( or against, yes!) a breed and you have a type in mind. The Vieux Barbet has nothing to do with the many Poodle types you see nowadays here and there and everywhere. Be careful...the Vieux Barbet has a GRIFFON type with a GRIFFON HEAD as the one above..mustache falls straight on both sides of the nose, the head is NOT CURLY or FRIZZY. The body has open curls and a rough coat, not tight frizzy fine hair. AND..last but not least, JUST  because there is a Vieux Barbet in the pedigree means nothing. It is all a question of selection.

Homemade with chicken stock..they smell really nice and are very crunchy! They love them! 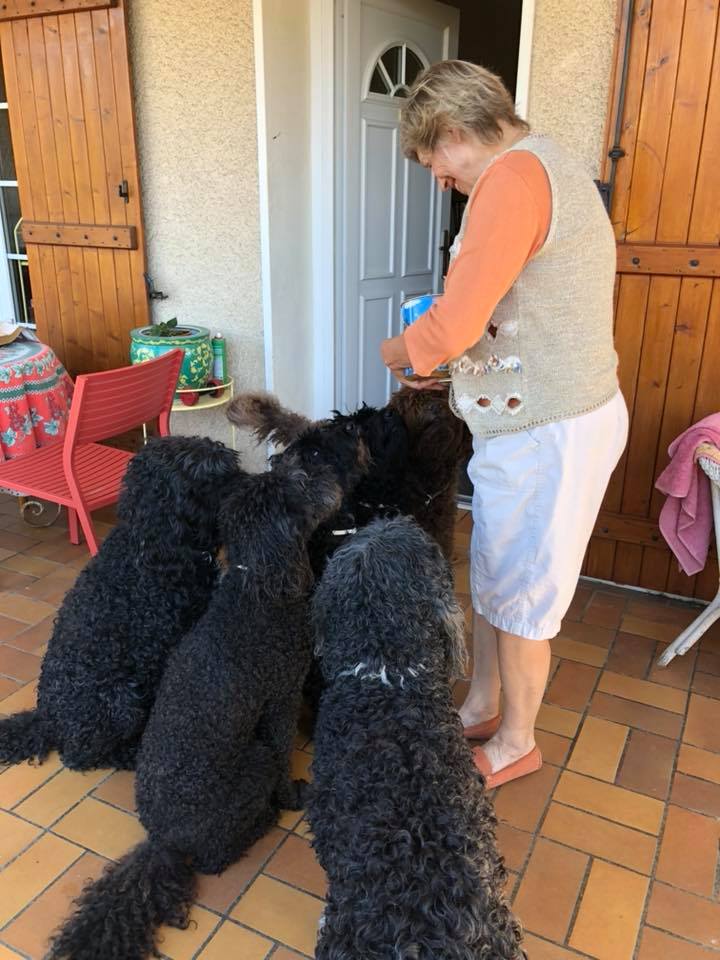