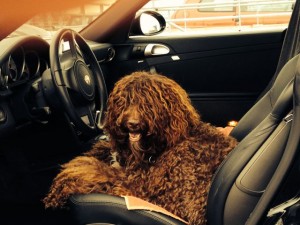 This is Tufi, in Swissland..

I have finally managed to put the videos together of Froggies working/hunting at the BICP in Lanty, France last September. Sorry, it’s of course in French.

The judge’s comments were at the beginning with French: ” the way to cover ground of the Barbet…he works well.It’s perfect.it has to always hunt that way. Perfect.”
Then M Raquin the pro trainer was yelling at ME a lot in the Froguette sequence because I was not doing this or that right. Caroline, a Barbet friend did the filming and I finally took the time to put it together.

The Barbet, a hunter? Not so sure. Many people use as their key words to attract attention, those words: hunter water dog, wasserchen et al. However as Fiona L Lucas says below, it’s real work. Claiming a Barbet is a hunter is ludicrous in my humble opinion. Watch my video and then look into the work Jacques Cyr and Fiona do and go from there. Selling a Barbet at high prices and pretending it’s going to hunt…is not close to any truth.

Some have acquired Barbets based on that false advertising and have quickly seen that they were not all hunters. Certain lines can, of course. It takes a heck of a lot of training and until people accept that fact and respect the Barbet and its working lines for that aspect of the breed, the Barbet is doomed to die.I feel very strongly about the breed and its capacity to work and I am saddened by those who do nothing to help that aspect of the breed.

This is what Fiona L Lukas ( in the UK) wrote:

A little clarification and information might be helpful here for those with a genuine interest in raising the status of the Barbet as a working gundog/retriever …. read on if you care!

1. Firstly, there is a difference between a working dog (classified in the KC Working Group) and a working gundog (classified in the KC Gundog Group) Any breed of dog may “work” whether or not it is in a defined KC group. Assistance dogs are highly trained and may be pedigree breeds, crossbreeds or mongrels who work in an extremely skilled way and in a rôle which can be, and is, being, undertaken by some barbets at present. I believe that the discussion here is about the rôle of the barbet as a working gundog. No dog (whether in the KC Gundog Group or not) can work usefully “in the field” without considerable training. The ability to fetch a long-dead duck from a pond does not make a barbet, or any other breed, into a retriever which is an asset to anyone “in the field”, that is to say, on a shoot; on a shooting day a dog will be working on live or freshly shot game around other dogs, farm livestock, possibly near roads, in a situation where live ammunition is being used. Due, in my opinion, to the difficulty of maintaining the coat,and consequent rise in popularity of other gundog breeds, the barbet has not, I believe, been generally utilised in this way for some considerable time (if ever) resulting in a loss of working drive compared with that of the modern working gundog. This is a vicious circle – the fewer barbets bred and trained for the shooting field, the less likely they are to be adopted by the shooting fraternity. It takes an enormous amount of effort, time and skill to produce a trained working gundog …. how many barbet breeders are taking this into account in their breeding programs and promotion? Surely this is essential if they want to recover what we can only suppose was a higher working drive in the past. Is it a vain hope to expect any breed registration organisation (kennel club) to classify a “new” breed as a gundog if there are no (or virtually no) examples of that breed that actually work in the field? As a dedicated working gundog owner with a barbet that I have trained myself (with professional assistance) and IF the breed is ever to be recognised by The Kennel Club, I would like to see it classified in the Gundog Group, but I have come to the conclusion that, for the reasons I have given already, and others, that it is increasingly unlikely.

3. The SWD and Lagotto have been classed, within the KC (UK) Gundog Group, as “water retrievers”, but as there is no such “official” “sub-group” they appear to have had to invent their own competitive tests. This, in my opinion, will do nothing to help the status of these two breeds within the shooting fraternity of this country as they are, at present anyway, unable to enter gundog Working Tests or Field Trials for Retrievers and, in any event, a breed would not become acceptable to a “gundog person” or “shooting person” if it were classified as only a “water retriever” as opposed to an “all-round retriever”. In the UK shooting field, retrievers are expected to retrieve from land or water, and to hunt when necessary. In addition there is no such thing as a Hunting Group within the KC (UK) classification.

What I am saying is that in France it is IMPOSSIBLE to work on the breed since people are most reluctant to help and very ready to jump at throat as recent activiuty shows. When I have to keep sending people to another country to get a Barbet because there is no production in France, then I say that there is a problem.

The Spanish Water Dog  as is in the name is also a water dog.  No one gives a flying hoot about the Barbet being able to retrieve out of deep water and just want a dog with a nice coat. The SWD  are also nice dogs and most people have not a clue of what a Barbet is in France( after so many years of attacks about the breed being extinct )  and just want a dog with a nice long coat. The fighting and lack of support of the breed club will exterminate the breed in its home country as they already appear to have become a satellite country to a Poodle type with an impossible coat to manage due to lack of proper selection.

I will now reserve my dogs to people who want a Barbet because they know why. There are a few still in France. Not many, but breeding to breed is not my objective.Never has been.

A Spanish Water Dog, Perro Turco, you can get quite rapidly.The breeder is nice, competent and does a lot for her breed.The breed is not near extinction!

I say go for it. AND since regardless of what many think ” Memory is the future of the past”: this is exactly what JC Heramns said when there was no production of Barbet back in the 80?s , so he sent the people interested in a Barbet to an English sheepdog breeder who was no one else but the wife of the judge who supported him…and the judge of the 2014 French Specialty show. That is documented in a club bulletin. 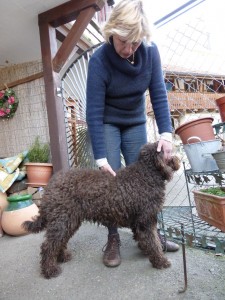 Since it is impoosible to get a straight answer out of many in France, you try to compare what is bigger or smaller than a bread box to figure things out by yourself. Not easy, but “normal” with the Barbet world in France. Everything is generally a hassel, big or small, but a hassel. While I was on my way to visit a friend in Switzerland a couple of days ago, I was listening to the radio broadcast in French (Swiss Romande). The tone was noticeably different than the French negativist tone. News were good, business was flourishing, profits were up….I was seeing so many nice, new cars driving past me, it was like being at a car show. Well, anyway.So much for that.

There appears to be a major major bad overall French attitude towards everything making it difficult to accomplish anything. We in France all know that. Business is bad, attitudes are for sh– and help is not anything to consider asking for.From anyone.
You send someone an email to ask a simple question.Very often they ignore you and don’t answer and when they do, you get an earfull of what you want but not an answer to a simple question.

We all know that the club ( with the assistance of the breeders, haha) is supposed to lower the sizes in the standard of the Barbet. Then you look at the 8th wonder of the world, ask for a size and they turn their nose up and refuse to answer. It’s quite obvious that a bread box is a bread box. Not to everyone…

We still have some lying about dog sizes..we know who they are and they have support in holding them up high-er, and higher.

I can hardly wait for the club specilaty show. I want to see if a 2/3 cms matted coat is included in the size of a dog…I asked, but got no answer.

This is me, and Ela who is not standing properly because if she were she may have been even 53, haha….I am 1.72 and not shrinking yet!

This is Ela Samba de la serve de la chapelle d’Alexandre. She was measured in her country of residence, Switzerland, at 51.5 cms. Because she was alledgedly and conveniently missing .5 cms,  the breeding commission decided that she had to use a BIG male to make BIG puppies*….the breeding commission is of course headed by the person whose dogs are there also to rescue everyone’s in the breed. Apparently, her coat is NOT curly enough either… more the reason to make sure she does not produce anything but BIG dogs with tight ungroomable frizz.

So, they are sovereign in their country and that is that.

We also  know that when there’s a will, there’s a way and we learn that a male can grow 2/3 cms in not time flat even at the age of 3 supported by his breed club when we know very well he does come up to their knees.

I do wonder how long this scam is going to continue? Well, I don’t wonder, unfortunately, I sort of know. When it’s about money, irregardless of what happens, it will continue.

So you sit there and shut up, as most do, or you play Barbet Police as I was recently accused of, by a Brit national. Now: IF I said nothing? Where would be all be? I not, but everyone else would be making Hermans Barbet moderne poodles. Voilà, voilà.

* It goes without saying that there is no mathematical documented proof or follow up on the fact that a huge male was used….what for?! 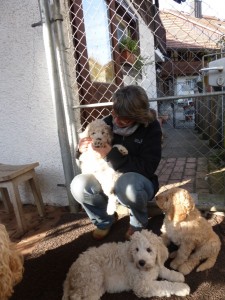 How things happen, when and why? Who knows. The lovely litter of Barbets in Switzerland is a dream come true.We are all supportive to each other through thick and sometimes thin. Love to you, dear Carmela. 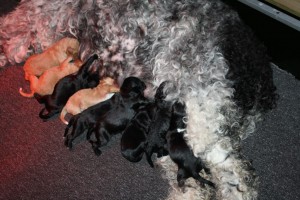 Ulysse is one of the 2 purest Barbets left in the world. It is important he reproduce as much as possible since in his line there is not any poodle blood, IWS, SWD…and keep in mind, I repeat again that the breed is extremely fragile. It is our duty and responsability to help them survive as pure as possible.

His brother Ursus is alive and well in Finland. He has also been working for us and the breed, and there is more to come.

In passing, I would like to mention that these 2 guys are healthy, have a proven track record of producing beauties. 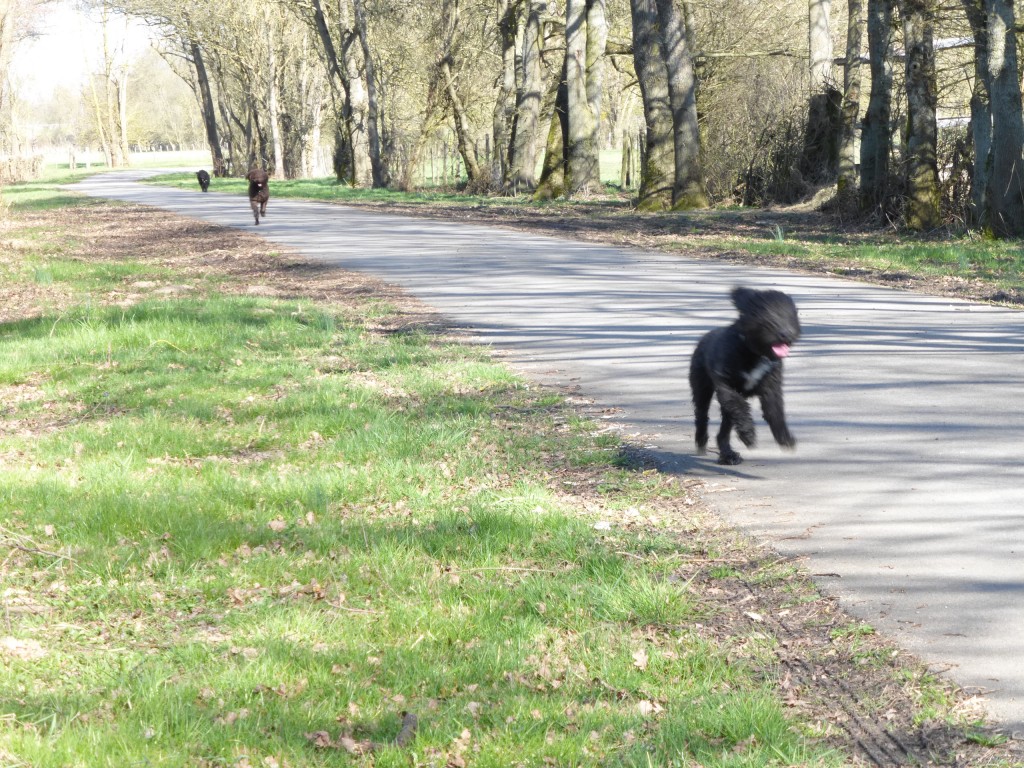 cherche and apporte…and see what happens 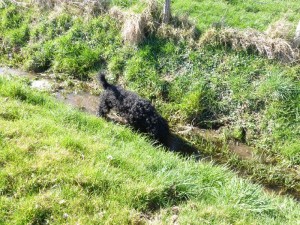 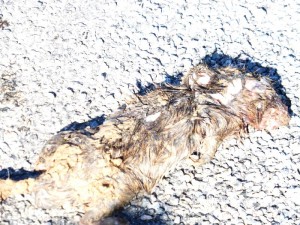 So…off he went, until he could “apporte”…Froggy is an extremely obedient Barbet, always looking to please!