Let’s give it a thought.No one seems to have ever worried about it, have they. We are still waiting for the French Club to start reacting on more than giving it ” a thought”, but some type of action would be appreciated?

The Old Barbet breed is dying while the modern one is moving along, or is it….we now have confirmation ( as if we needed it) that the Poodle is on its way out, and in the fall it will take all the Barbets since most have Poodle blood and some have only that ( to this date).

The Barbet Modern is probably the greatest scam that has come along in many years. Perhaps the reason no one in France is doing anything about it, so they can claim innocence? Too many lies, falsified pedigrees and people working ever so hard to destroy breeders( and what is left of the old breed). A club diddling with colors to be banned and not helping breeders falling like flies left right and center in France while the Lagotto flourishes. Proof being in the pudding, we need to give them a benefit for our doubt. That should be it.

I am not sure anyone cares any more about the Poodle than they care about the Barbet, alas.Our poor “rare” breed is dying and the only thing being done is making sure we add Poodles everywhere they weren’t.

Read the info very carefully and scroll down to Mrs Weir’s reference to EUGENICS and remember you have seen that word here. Meaning the efforst of one or 2 modern Barbet breeders to make sure their kennel name is in ALL dogs born the the Barbet world.

Who will speak up? Calculated risks? haha. 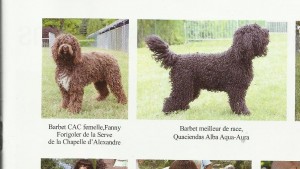 Near the really long article on the Lagotto, there are the results of the Club show 2013, in Chatel Guyon.

I found with delight a photo of some of my favorite dogs. Fanny ( Booly Wooly x Coccolina) who has a lovely head very typical of the line and lovely Alba, of a similar size and a bit curlier with lovely big curls. Both girls were up for BOB and eventually Alba got it because she was shown magnificently well by her owner. When 2 dogs of similar quality are up against each other, then the next criteria for judging is the handling and it was quite easy to decide, then. Next year, it won’t be eany easier!

Focus on the dog, not smile to get the judge’s attention, be discreet and son on and so forth….they judge the partnership and there is always one.

As mentionned before, both of these girls are nicely sized, at 53/54 cms and there were no females taller than the average male ( 58) this time. So, the size naturally came down. OUF. 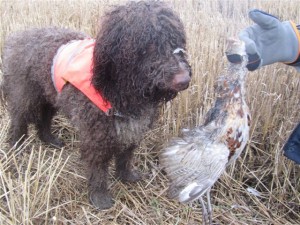 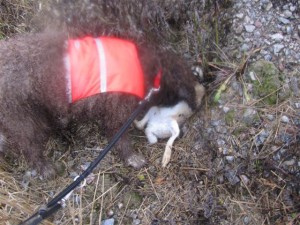 Sooooooooooo, she not only did feathers but she did rabbits as well, well worth atitle of hunting dog of the year! 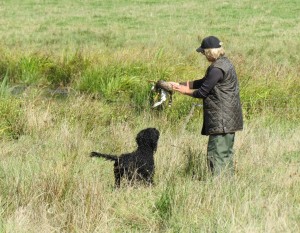 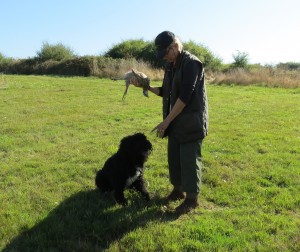 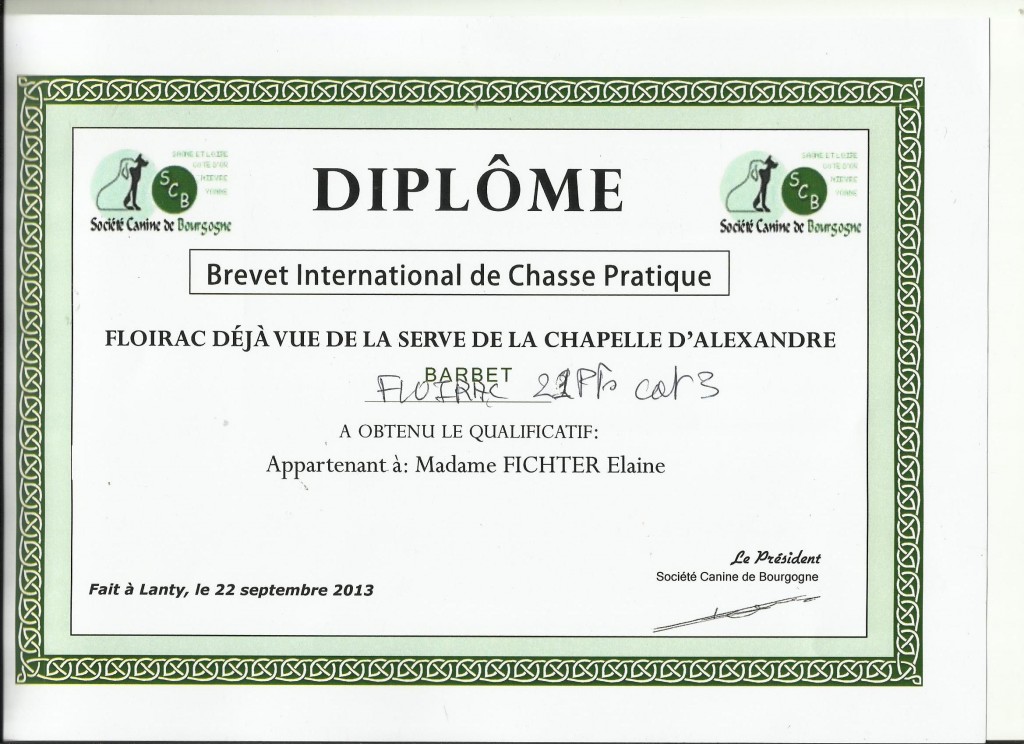 The point in doing the very important French BICP (German HZP) had nothing to do with anything at the club or going up the quotation points ladder; it basically had to do with the Barbet and its past as a gundog and the fact that it has contributed to many hunting breeds in Europe. I wanted to do it to prove a point to hunters. The Barbet with a proper coat can be an all around gundog who ALSO goes to water. I am told a proper Barbet coat is the one of the Griffon Korthals when it is long…iunteresting, eh?! A “just” waterdog has no future, not other than a couch potato and even then?

Our judge was a person from the Marais Vernier area of France and he grew up working with Barbets( as hunters and gundogs).Yes, this was  back in the 60’s. Yes, Ma’m. He knew exactly how the Barbet should work ( as opposed to some of the air-heads we have had as working judges in the past/ can you say that of a man?!)

Surprisingly, my 2 Froggies did a helluva job on land and not so well in water.Froguette pointed officially ( witnessed) just before she flushed her pheasant. Froggy did not , but he did canvass the area well and did hids pheasant too. I was a bit disappointed in their water work, but they didn’t understand this particular context. Oh well. I think I proved my point by getting the judge’s congratulations on their land work. We know they can do water!

“The Barbet is the foundation of many of our hunting breeds. These 2 Barbets did very well for dogs who do not hunt and who worked on their natural instinct.”What more can I ask for?

I say: Mission accomplished and we will go back for the fun of it, again.

Bravo Froggies. Froggie and Froguette got 21 points for their first real deal. 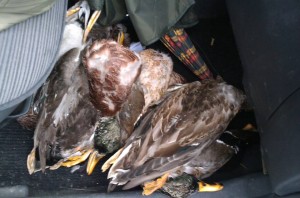 I have been working the dogs on a duck each day after work,  and the ones who stay at home are slightly jealous son I had to take Guyguy out and let him have “his” own duck to retrieve. The are so funny! 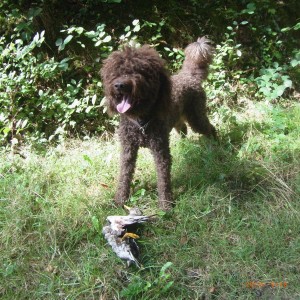 I do wonder if they prefer land or water. What do you think? 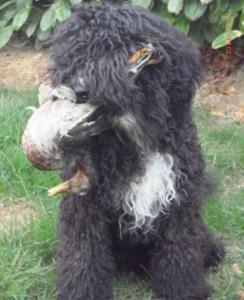 Vennie and her own duck… 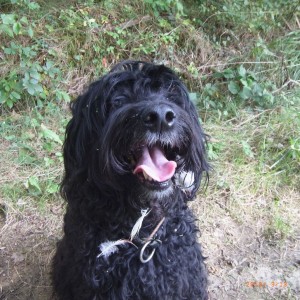 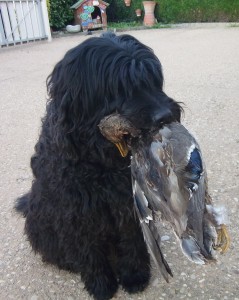 So, we fooled you..Thelma was allowed to retrieve on land since we have a dozen ducks to use, so she had a great time. She did not kill the duck, and she did carry it around with a lot of pride.
Do you really think anyone with the name of Thelma La Douce would kill?